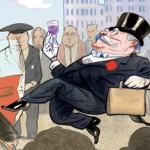 How have the AmLaw 200, the biggest law firms in America, fared in recent times?]

After a decade of breakneck growth, the global financial crisis brought matters to a sudden and dramatic halt.  Following revenue growth that saw total revenues hit $84 billion in the eight years until 2008, the following year saw $2.4 billion wiped off their top line, according to the AmLaw survey, who say it was the first drop in overall revenues since AmLaw started taking the survey in 1985.

Facing increased pressure from clients on billing rates and a dramatic reduction in demand—a recent survey by Hildebrandt Consulting and Citi Private Bank finds that demand for legal services has contracted at a compound annual growth rate (CAGR) of 0.4 percent since 2008—many firms were forced to cut costs in order to prevent their profits from plummeting.

However that revenue drop was only part of the story, because the AmLaw 200 firms soon recouped their losses.  They also went through rounds of layoffs and cost-cutting and soon saw a rebound.

The $2.4 billion reduction in aggregate revenue in 2009 was recouped within the space of 12 months, with total group revenue rising $3 billion in 2010 and continuing to grow at a CAGR of 4.1 percent over the past two years. Of the 186 firms that have been present in The Am Law 200 in each of the five years since the start of the recession in 2008, 134 increased their gross revenue over that time.

Of those, 122 achieved increases in net income as well. Amazingly, more than half of all Am Law 200 firms posted higher figures in each of four key metrics—revenue, net income, revenue per lawyer (RPL), and PPP—in 2012 than they did before the recession hit. To get a sense of how individual firms survived the recession, we calculated five-year CAGR growth rates for revenue per lawyer and profits per partner for the 186 firms that have consistently appeared on The Am Law 200 since 2008.