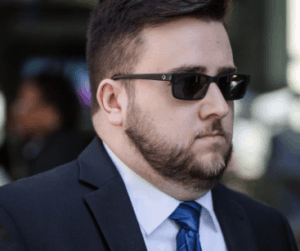 LOS ANGELES – An Illinois man who admitted responsibility for a phishing scheme that gave him illegal access to over 300 Apple iCloud and Gmail accounts, including those belonging to members of the entertainment industry in Los Angeles, has been sentenced to nine months in federal prison.

Majerczyk pleaded guilty in September to a felony violation of the Computer Fraud and Abuse Act, specifically, one count of unauthorized access to a protected computer to obtain information. Majerczyk was charged by federal prosecutors in Los Angeles, but the case was transferred to the Northern District of Illinois, where the defendant pleaded guilty and was sentenced.

“This defendant engaged in a computer hacking scheme that not only gave him access to his victims’ computers, it also gave him access to the most personal details of their lives,” said United States Attorney Eileen M. Decker. “This was a deep intrusion into the victims’ privacy and a violation of federal law.”

“Mr. Majerczyk manipulated hundreds of victims by tricking them into providing access to their accounts, including high-profile victims whose information was specifically targeted,” said Deirdre Fike, the Assistant Director in Charge of the FBI’s Los Angeles Field Office. “The lasting harm this type of intrusion can cause to celebrities and non-celebrities alike cannot be overstated, and this case should serve as a necessary reminder to all of us that it is dangerous to respond to unsolicited e-mails in which our personal information is requested.”

Many of Majerczyk’s victims were members of the entertainment industry in Los Angeles. By illegally accessing the e-mail accounts, Majerczyk accessed at least 300 accounts, and at least 30 accounts belonging to celebrities.

The charge against Majerczyk stems from the investigation into the leaks of photographs of numerous female celebrities in September 2014 known as “Celebgate.” However, investigators have not uncovered any evidence indicating that Majerczyk was responsible for any of the postings of celebrity photographs.

In addition to the prison term, Judge Kocoras ordered Majerczyk to pay $5,700 in restitution to one victim whose photos were published on the Internet. Majerczyk was ordered to begin serving his sentence by February 27.