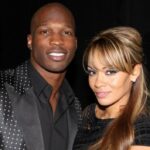 t’s not perhaps the ideal way for an attorney to make the news, but when lawyer Adam Swickle got a slap on the backside from client, NFL player Chad Johnson, it was the judge’s turn to slap Johnson.

The former Miami Dolphins star, who has been on probation since pleading guilty to headbutting his former wife, Evelyn Lozada, in 2012, appeared in court for violating the terms of the judge’s order.

After reaching an agreement with prosecutors, he expected to be handed a community service order and counselling at the hearing.

“I don’t know that you’re taking this whole thing seriously. I just saw you slap your attorney on the backside. Is there something funny about this?” she said after the courtroom erupted in laughter.

“The whole courtroom was laughing. I’m not going to accept these plea negotiations. This isn’t a joke.”

Johnson protested that slap was not meant to provoke a reaction and tried to apologise for his actions.