You are here: Home / Today's Lawyer / The Lawyer to Close Guantanamo 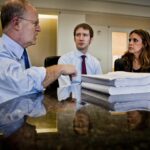 Skadden Arps lawyer Clifford Sloan is likely to be the man-on-the-spot when it comes to closing Guatanamo Bay prison, according to reports.

Sloan has already worked in senior government positions, including as Associate Counsel to the President and also as assistant to the Solicitor General. He’s also served on the US Court of Appeals for the District of Columbia Circuit’s Advisory Committee on Procedures, according to the Skadden website.

The Guantanamo closure will be a political hot potato and require some legal and political skills, which may be why Secretary of State John Kerry recommended the legally and politcally astute Sloan for the job.