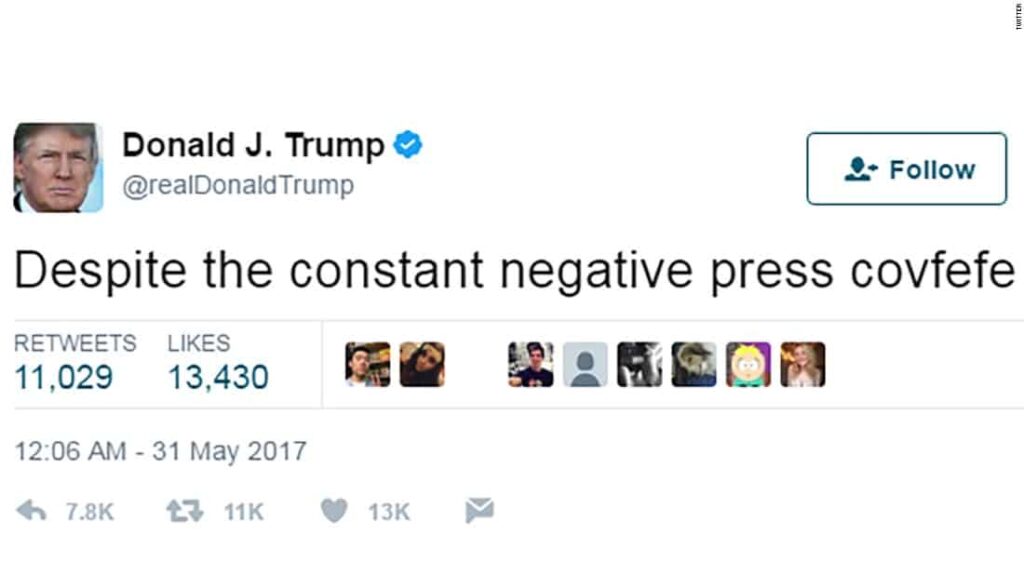 Paul Hansard – “Covfefe” is the word.  Not “Grease”, but a new word developed by none other than the Commander-in-Chief, the President of the United States in another Twit-filled presidency that has seen a new word enter the lexicon and forever to be trademarked to Donald J Trump.

The – presumably typoed word, although as someone who is a proven poor speller maybe something he intended to say but we mortals just don’t understand – Donald Trump has tweeted ‘covfefe’ so as to thoroughly confuse his Twitter followers and – well, anyone, really.

Was it a misspelling – he has after all done it with  “unpresidented” and “honered” – or is there some subtext in there that we all need to heed.  Is it code for something?

As one writer noted,  “Keyboard detectives have pointed out that the strokes needed to type “erage” are vaguely similar to “fefe”, and that would fit semantically with the rest of the brainfart. So, boringly enough, he meant to type “coverage”. But it was too late.

So what to make of ‘covfefe’?

The pronunciations is one thing.  How is it said?

The lead went to Cov-FEE-fee.  Presumably it depends upon the semantic basis of the word, plus regional variances will play a roll.  There is little to be obtained from an examination of the word, but for lawyers and others, it may perhaps take on a special meaning:  A word that means nothing – as in pleadings where tautology and repetition and sheer meaningless can predominante.

Seventy years ago, George Orwell wrote: “Politics and the English Language,” in which he wrote that politicians, journalists and academics were increasingly using meaningless words and euphemisms to make “lies sound truthful and murder respectable, and… give an appearance of solidity to pure wind.”

Words that are overused so as to become meaningless – “terrific”, “awesome” – or so politicized they mean nothing – “centrist”, “socialist” – or simply words that fill space – lawyers know what we mean.

Enter ‘covfefe’, the latest addition to the meaningless lexicon.  Political and meaningless all in the same 7 letters.  Just like the man who invented it.

>>> See the latest law jobs on LawFuel’s law jobs board