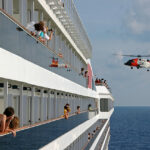 Cruising is one of the most popular methods of travel in the world, with over 10,000,000 people embarking on a vacation on the high seas each year. But while many turn to cruising for a relaxing getaway, they can end up getting something far different from the peaceful experience they were expecting.

According to international cruise ship lawyers Lipcon, Margulies, Alsina & Winkleman, P.A., the number of cruise ship accidents and crimes has been increasing exponentially, including passenger injuries, overboard accidents, cruise ship sexual assault, and theft. Since the Costa Concordia capsized in January, 2012 off the coast of Italy following the captain’s last minute decision to change course, accidents at sea seem to be happening more frequently, or at least, are finally gaining media attention. But is the public truly getting the whole story?

The attorneys at the firm explain how loopholes within the cruise industry have contributed to this problem and what rights victims have following an accident or crime at sea.

What Factors Can Lead to a Cruise Ship Accident?

There are several factors that can contribute to a cruise ship accident. Though some happen by chance and through no one particular person’s fault, Lipcon’s cruise lawyers explain that the vast majority of accidents within the industry are the result of negligence.  Whether it’s because a crew member wasn’t adequately trained, equipment wasn’t properly maintained or because there was a lack of reasonable onboard security, the failure of a cruise operator to maintain a reasonably safe shipboard environment is usually at the root of cruise ship accidents and crimes.

But while U.S. maritime law requires cruise lines to report serious accidents and crimes to the FBI, Coast Guard and other authorities, cruise companies often fail to do so and are able to get away with it due to several loopholes in the industry.  Let’s explore these loopholes in further detail.

Loopholes in the Cruise Ship Industry

When an accident or crime occurs onboard a cruise line, the company may be held liable for damages to the victims if the incident is the result of the line’s own negligence in failing to provide a reasonably safe shipboard environment. Once word gets out about a serious injury, death or crime, the incident is reported in the media and the world is exposed to the dangers that can potentially exist on cruise ships. The more accidents that are reported, the lower the public’s opinion of the cruise line and the lower the cruise line’s revenue.  Since no cruise line wants to suffer a monetary loss, lines often sweep accidents and crimes under the rug.  They do so not just because they are trying to evade liability, but partly because they can – and have been able to – for years.

Most cruise ships are registered in foreign countries and fly foreign flags, allowing them to divert responsibility for an investigation to those nations. Though there are strict maritime laws in the U.S. that can protect a cruise accident victim’s rights, many of the foreign countries where ships are registered do not bother to thoroughly investigate an incident and are highly unlikely to communicate with victims regarding the status of a case. As a result, many victims that fall prey to a crime on the high seas or that are severely injured at the hands of a negligent cruise line are unable to obtain compensation for their losses and injuries.

Up until a few days ago, cruise lines were only required to report accidents and crimes to the FBI and other investigative authorities if there was a proven incident. Lines were not mandated to report incidents that were only alleged.  Since most crimes at sea are followed up with little to no investigation, the majority cannot be proved.  This loophole allowed cruise lines to evade responsibility for reporting crimes by leaving out the whole truth and giving the public a skewed perception of what really happens in the industry. However, Senator John “Jay” Rockefeller recently introduced legislation called the Cruise Passenger Protection Act of 2013, which requires lines to disclose information regarding all crimes – alleged or otherwise – to the FBI and to the public, allowing for increased transparency with incident reporting.  Unfortunately, this isn’t enough.

Even though cruise lines have to report accident and crimes, they still attempt to avoid responsibility for these incidents.  By exploiting loopholes in their passenger ticket contracts, cruise lines can limit or entirely avoid their liability for an accident or crime. To the untrained eye, it may seem as though these clauses are binding, but an experienced cruise ship lawyer can determine if there is a way to hold the cruise line accountable, at least, in part for the incident.

Most cruise passengers board ships and embark on their vacations without thinking for a moment that their lives may be in danger. No one wants to think the ship they are sailing on is dangerous, but truth is, cruise ships can be breeding grounds accidents, injuries, and crimes. When an accident or crime does occur, it’s important to stay as calm as possible and report the incident immediately.

According to the maritime law firm, each cruise passenger has the right to a reasonably safe environment onboard their vessel, and when that right is violated victims may turn to an attorney for assistance in pursuing a case. If a cruise company is found at least partially responsible for the accident or crime due to their failure to maintain a reasonably safe shipboard environment, they may be held liable to pay damages to the victims and their loved ones.

Lipcon’s cruise ship lawyers would like to remind all cruise passengers that they have the right to report incidents straight to the FBI and Coast Guard and do not have to wait for the cruise company to file its own investigation. The sooner the incident is documented, the better the chances the victim will obtain justice for their injuries and monetary losses, along with their pain and suffering.

Anyone embarking on a cruise can also reduce their chances of being hurt at sea by traveling in large groups, avoiding secluded areas onboard a vessel and in port, establishing meeting points, and limiting interaction with strangers to public areas only.

Anyone who has been involved in a cruise ship accident or crime can learn more about their rights and the firm’s experience handling passenger claims by contacting Lipcon, Margulies, Alsina & Winkleman, P.A. for a free consultation.

Lipcon, Margulies, Alsina & Winkleman, P.A. is an award-winning maritime and admiralty law firm handling personal injury claims against cruise lines, cargo vessels, tow companies, and boat operators. The attorneys at the firm have represented thousands of passengers and crewmembers injured or killed on ships worldwide, as well as those who have been denied their right to medical care, provisions or wages. The firm has consistently received the “AV” Preeminent rating of 5.0 out of 5.0 from their peers for their high ethical standards and professional ability, and its attorneys have been acclaimed for their high degree of professional achievement in the field of maritime law. The firm’s offices are in Miami, Florida, directly across from the largest cruise ship passenger port in the world. Visit the firm online at www.lipcon.com