You are here: Home / Today's Lawyer / Don West – The Knock-Knock Joke and Other Matters 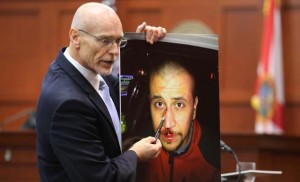 Don West was well known and a “super lawyer” before George Zimmerman and his case of second degree murder charges came along.

But the Zimmerman case and West’s “knock Knock” joke and opening in the Zimmerman trial raised the West profile and shocked many somewhat.  Although not necessarily all those who had watched West in his trials before.

West’s cross examination of witness Rachel Jeantel that seemed mainly to center on Jeantel’s abilities at elocution on a cellphone and raised some questions about the way West has approached the case.

West, reading from the transcript, said she had in fact replied, “I coulda hear Trayvon.” Jeantel appeared exasperated with West’s line of questioning. “Trust me, they messed up,” she said. “‘I could hear Trayvon.'” West played the recording for the witness and the judge without the jury present in the courtroom. On the recording, Jeantel’s response to de la Rionda’s question was difficult to understand. “You didn’t say ‘I couldn’t hear it was Trayvon’ or ‘I couldn’t know it was Trayvon?'” West asked, as Jeantel defended her statement.

He also raised questions with the extended colloquy on the topic of whether or not the phrase “creepy-ass cracker” is a racial epithet or not, which was odd, because, as we know, this case is Not About Race because Nothing Is Ever About Race. Come to think of it, maybe West just knows his audience.

He represented Lou Pearlman, manager of the boy bands like Backstreet Boys and N’Sync, who faced fraud charges.

He has practised criminal law in Orlando for 30 years, providing experience that will be invaluable, particularly given the “stand your ground” laws likely to come into play in the Zimmerman trial.