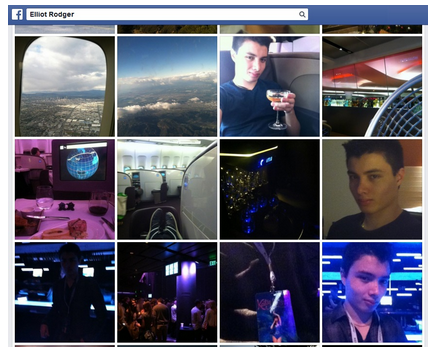 As usual with mass slayings the social footprint of the perpetrator is of keen interest to authorities and analysts and the videos of Elliot Rodger, who was killed after his own killing spree in Santa Barbara, displays an interesting take on his motivations and malehood, among other things.

Rodger’s Facebook page is full of selfies and photos of his rich but lonely life. There are photos of him, by himself, flying first class and attending a private Katy Perry concert, and with his parents, at the Hunger Games premiere in 2012; his father was an assistant director of the film. Friends are generally absent from the photos and make few comments; he likes many of his own photos, and is usually the only one to do so. He was obsessed with himself and with putting his opulent lifestyle on display, and Facebook was the perfect outlet for it.

YouTube on the other hand was where Rodger expressed his despair, in video after video “vlogging” the unfairness of the world and his not having a woman in his. In one video, he sits in his car, his camera trained on a couple at the beach, while he laments how lonely their togetherness makes him feel.

Rodger favorited more Pokemon videos on YouTube than PUA (pick-up artist) ones; the most disturbing favorites I saw in his YouTube videos were eight minutes of the gory Game Of Thrones “Red Wedding” episode and Philosophy of the Knife, a graphic film about Japanese torture during World War II. Thrown in among the video game and cartoon videos, they almost seem planted for dramatic effect.

One of the few videos he made with other people in it — that he’s not stalking — is from a July 4, 2011 party, taken at a table next to the pool at a luxurious home. It is just 26 seconds of Rodger silently filming other people talking and eating, ending with the person next to Rodger flicking him off, jokingly.

Contrary to the Daily Kos claim, Rodger was getting mental help. His parents reportedly saw his dozens of YouTube videos — of him wandering alone or sitting in his car complaining about the world’s unfairness, his loneliness and a desire for vengeance — and were concerned enough to report them to police, their lawyer tells ABC News. He was being treated by multiple therapists, according to the lawyer, and had been diagnosed as “a high-functioning patient with Asperger syndrome.”

Rather than the bodybuilding and anti-PUA communities simply supporting his world views, many challenged them in the conversations I reviewed, all of which have removed from those forums but are available in cached form. “If you could release a virus that would kill every single man on Earth, except for yourself because you would have the antidote, would you do it?,” he asked in an April 2013 thread on Puahate.com. “If you were ugly, you’d still be incel,” responded one forum user referring to the group’s term for “involuntary celibate.” “Women would just have kids by using sperm banks.” Another said he’d destroy the virus and get women by being the hero. Yes, there are ugly attitudes toward women, with one person saying they’d be too stupid to realize they could break into the sperm banks, but it’s not the majority.

On a forum on BodyBuilding.com, users were even more confrontational. When Rodger complained this month about seeing a “short, ugly Indian guy driving a Honda civic [with] a hot blonde girl in his passenger seat,” other users responded to say that he was racist, that his jealously was ugly and that the secret to getting girls was to “be fun to be around” not to have money and a BMW. A user who went by the handle dtugg was especially critical of Rodger. He had apparently seen Rodger’s YouTube videos. “I see you got rid of those serial killer-esc videos on Youtube,” he wrote. Rodger responded saying his parents made him take them down, but that he planned to repost them. “I’m not trying to be mean, but the creepy vibe that you give off in those videos is likely the major reason that you can’t get girls,” responded dtugg.

In another thread, a user confronted him for saying that “women [prioritizing] brute strength just shows that their minds haven’t fully evolved,” given that he was obsessed with pursuing beautiful women himself. “So it’s perfectly acceptable when you are drawn to indicators of evolutionary fitness, but when women do it it’s because they are not fully evolved,” the user responded with a gif of Jennifer Lawrence mouthing, “OK” (not knowing that Rodgers may have actually met the Hunger Games star).

Read about the Shootings and see his video Here 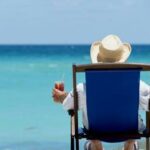 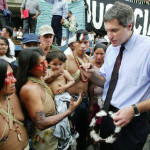