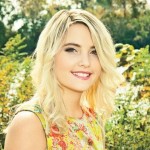 Erin Merryn, the face of Erin’s Law, requiring public school students to receive education about sexual abuse, is having a big day in New York today. The 28 year old sex-abuse victim who is also a Woman of the Year has seen her law passed in seven states.

The law has now cleared the New York State Senate and awaits a ruling from the State Assembly.

Merryn endured abuse at the hands of the uncle of a friend and later a cousin. The story is not uncommon, with one in four girls in the US being sexually abused, while the statistics in other jurisdictions is just as bad if not worse.

“Erin Merryn offers a voice for those who have been victimized while sharing a vision to protect others from facing the horrors of abuse,” said New York State Senator David Carlucci last year, after the bill passed in that house with a 57-1 vote.

Her story—and momentum behind her cause—spread later in the year, when Julianna Margulies presented Merryn with her Glamour Women of the Year award at New York City’s Carnegie Hall. “It just exemplifies what we can all do,” Sandra Fluke told the Huffington Post after the ceremony. “We can all step forward and face what we’re afraid of, and people will support us when we do that.”

Merryn’s goal is to see her law passed in all 50 states.

The sex abuse situation is bad, but with people like Erin Merryn and Erin’s Law making its mark in more jurisdictions it is less a problem and much more public than ever. Maybe she will achieve her aim of putting sex abuse offenders out of business.