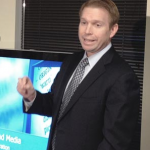 The PRISM scandal has put the focus on the NSA, privacy issues and other matters, but it has also focused attention on the lawyers like Ted Ullyot (pictured) who have had to deal with countless requests for information from the government over privacy related matters.

Ullyot was previously a lawyer in the White House who helped co-ordinate the leak of CIA agent Valerie Plame’s identity, so he’s no stranger to secrecy, leaks and the NSA. A lawyer who defended Facebook against the lawsuit against the Winklevoss twins, Ullyot has had an eventful time at Facebook.

BusinessWeek take a look at the inhouse counsel at Microsoft, Apple and Yahoo! to see who they are and how they’ve handled the 4000 – 10,000 government requests over six months, with Facebook receiving most.