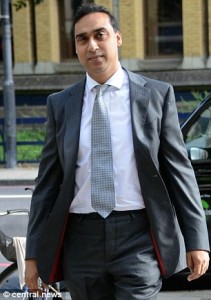 For a Queens’ Counsel working in one of London’s top chambers as a fraud specialist, it was the most bitter of ironies that Rohan Pershad should now be found guilty to tax fraud over £600,000 VAT by claiming he was poor at paperwork.  After a jury trial, the barrister was found guilty after 10 hours’ deliberation.
[wp_ad_camp_1]

In sentencing, Judge Aidan Marron QC told Pershad: ‘You have brought disgrace on yourself and have aggravated that position by fighting this case and lying in front of a jury.

‘It saddens me that I have to deal with you.’

The case is the first high-profile prosecution of a lawyer since HMRC announced a taskforce to crackdown on tax evasion in the legal profession, which has been under scrutiny for some years.

The lawyer reported that the jury had been told that Pershad had “disappeared off the VAT radar” in 1999 after he left 2 Crown Office Row for 39 Essex Street.

HMRC considered him to be a “missing trader” until he was questioned about not paying tax on his services billed as a barrister in 2011.

Pershad instructed Kingsley Napley partner Angus McBride and had denied the allegations from first being charged last summer . He pledged to “defend himself vigorously” and had 9-12 Bell Yard head of chambers Mukul Chawla QC as counsel.