You are here: Home / Lawyers / Gay Right, Gay Lawyer – What Happens Next? 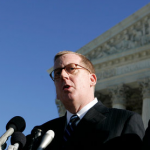 It’s a case that is reshaping America and has involved gay rights and moral issues over the past three decades.  And watching the developments over that time has been one of the country’s best litigators, Paul Smith, a gay lawyer who has watched the process with high professional and personal interest.

When the Supreme Court justices announce their decisions in two cases that could reshape marriage in America, few people will be listening more closely than Paul M. Smith, whose life and career have been entwined with the court’s three-decade evolution on gay rights.

As a secretly gay lawyer in the 1980s, Mr. Smith watched in silent disappointment as his former boss, Justice Lewis F. Powell Jr., joined the majority in a 1986 case that upheld a Georgia sodomy law. Out of the closet by the early 1990s, Mr. Smith went on to successfully argue a 2003 Supreme Court case that overturned sodomy laws in more than a dozen states.

It is that case, Lawrence v. Texas, that many legal experts believe laid the groundwork for the same-sex marriage cases before the court today. Mr. Smith worked on one of several challenges to the law barring federal recognition of same-sex marriage. He had also been asked to participate in the other case, about California’s ban on same-sex marriage.

Beyond his professional interest, Mr. Smith, 58, has a personal stake as a gay man who married his partner in 2010.

“I’m a member of the affected class,” he said in an interview last week, with a note of understatement.

The tall, redheaded Yale Law School graduate served as a law clerk for Justice Powell in 1980 and 1981. He did not tell his employer about his sexual orientation. “Very few of us thought we could come out and have a full career,” he said.

Several years later, in 1986, Justice Powell would cast the deciding vote in Bowers v. Hardwick, the case that upheld the constitutionality of Georgia’s sodomy law. Mr. Smith says his reaction was muted. The decision came at a time when, he said, “I had pretty well walled off my gay self.”

Like many gay men of his generation, Mr. Smith married a woman (in 1983) and started a family. They divorced several years later; his two sons are now in their 20s. After his clerkship with Justice Powell ended, Mr. Smith joined a law firm originally known as Onek, Klein & Farr, that specialized in arguing before the Supreme Court, and racked up a string of appearances that would place him among the nation’s elite litigators.