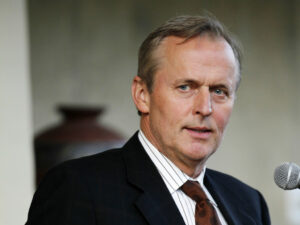 Legal Thriller author John Grisham wrote an op-ed piece for the New York Times on the mystery oa a Guantanamo detainee who had been seeking out Grisham’s books.  Why?  He looks at the injustice of it all.

About two months ago I learned that some of my books had been banned at Guantánamo Bay. Apparently detainees were requesting them, and their lawyers were delivering them to the prison, but they were not being allowed in because of “impermissible content.”

I became curious and tracked down a detainee who enjoys my books. His name is Nabil Hadjarab, and he is a 34-year-old Algerian who grew up in France. He learned to speak French before he learned to speak Arabic. He has close family and friends in France, but not in Algeria. As a kid growing up near Lyon, he was a gifted soccer player and dreamed of playing for Paris St.-Germain, or another top French club.

Tragically for Nabil, he has spent the past 11 years as a prisoner at Guantánamo, much of the time in solitary confinement. Starting in February, he participated in a hunger strike, which led to his being force-fed.

For reasons that had nothing to do with terror, war or criminal behavior, Nabil was living peacefully in an Algerian guesthouse in Kabul, Afghanistan, on Sept. 11, 2001. Following the United States invasion, word spread among the Arab communities that the Afghan Northern Alliance was rounding up and killing foreign Arabs. Nabil and many others headed for Pakistan in a desperate effort to escape the danger. En route, he said, he was wounded in a bombing raid and woke up in a hospital in Jalalabad.

At that time, the United States was throwing money at anyone who could deliver an out-of-town Arab found in the region. Nabil was sold to the United States for a bounty of $5,000 and taken to an underground prison in Kabul. There he experienced torture for the first time. To house the prisoners of its war on terror, the United States military put up a makeshift prison at Bagram Air Base in Afghanistan. Bagram would quickly become notorious, and make Guantánamo look like a church camp. When Nabil arrived there in January 2002, as one of the first prisoners, there were no walls, only razor-wire cages. In the bitter cold, Nabil was forced to sleep on concrete floors without cover. Food and water were scarce. To and from his frequent interrogations, Nabil was beaten by United States soldiers and dragged up and down concrete stairs. Other prisoners died. After a month in Bagram, Nabil was transferred to a prison at Kandahar, where the abuse continued.

Throughout his incarceration in Afghanistan, Nabil strenuously denied any connection to Al Qaeda, the Taliban or anyone or any organization remotely linked to the 9/11 attacks. And the Americans had no proof of his involvement, save for bogus claims implicating him from other prisoners extracted in a Kabul torture chamber. Several United States interrogators told him his was a case of mistaken identity. Nonetheless, the United States had adopted strict rules for Arabs in custody — all were to be sent to Guantánamo. On Feb. 15, 2002, Nabil was flown to Cuba; shackled, bound and hooded.

Since then, Nabil has been subjected to all the horrors of the Gitmo handbook: sleep deprivation, sensory deprivation, temperature extremes, prolonged isolation, lack of access to sunlight, almost no recreation and limited medical care. In 11 years, he has never been permitted a visit from a family member. For reasons known only to the men who run the prison, Nabil has never been waterboarded. His lawyer believes this is because he knows nothing and has nothing to give.

The United States government says otherwise. In documents, military prosecutors say that Nabil was staying at a guesthouse run by people with ties to Al Qaeda and that he was named by others as someone affiliated with terrorists. But Nabil has never been charged with a crime. Indeed, on two occasions he has been cleared for a “transfer,” or release. In 2007, a review board established by President George W. Bush recommended his release. Nothing happened. In 2009, another review board established by President Obama recommended his transfer. Nothing happened.

According to his guards, Nabil is a model prisoner. He keeps his head down and avoids trouble. He has perfected his English and insists on speaking the language with his British lawyers. He writes in flawless English. As much as possible, under rather dire circumstances, he has fought to preserve his physical health and mental stability.

In the past seven years, I have met a number of innocent men who were sent to death row, as part of my work with the Innocence Project, which works to free wrongly convicted people. Without exception they have told me that the harshness of isolated confinement is brutal for a coldblooded murderer who freely admits to his crimes. For an innocent man, though, death row will shove him dangerously close to insanity. You reach a point where it feels impossible to survive another day.

DEPRESSED and driven to the point of desperation, Nabil joined a hunger strike in February. This was not Gitmo’s first hunger strike, but it has attracted the most attention. As it gained momentum, and as Nabil and his fellow prisoners got sicker, the Obama administration was backed into a corner. The president has taken justified heat as his bold and eloquent campaign promises to close Gitmo have been forgotten. Suddenly, he was faced with the gruesome prospect of prisoners dropping like flies as they starved themselves to death while the world watched. Instead of releasing Nabil and the other prisoners who have been classified as no threat to the United States, the administration decided to prevent suicides by force-feeding the strikers.

Nabil has not been the only “mistake” in our war on terror. Hundreds of other Arabs have been sent to Gitmo, chewed up by the system there, never charged and eventually transferred back to their home countries. (These transfers are carried out as secretly and as quietly as possible.) There have been no apologies, no official statements of regret, no compensation, nothing of the sort. The United States was dead wrong, but no one can admit it.

Last week, the Obama administration announced that it was transferring some more Arab prisoners back to Algeria. It is likely that Nabil will be one of them, and if that happens another tragic mistake will be made. His nightmare will only continue. He will be homeless. He will have no support to reintegrate him into a society where many will be hostile to a former Gitmo detainee, either on the assumption that he is an extremist or because he refuses to join the extremist opposition to the Algerian government. Instead of showing some guts and admitting they were wrong, the American authorities will whisk him away, dump him on the streets of Algiers and wash their hands.

First, admit the mistake and make the apology. Second, provide compensation. United States taxpayers have spent $2 million a year for 11 years to keep Nabil at Gitmo; give the guy a few thousand bucks to get on his feet. Third, pressure the French to allow his re-entry.

This sounds simple, but it will never happen.