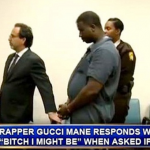 Guccie Mane copped a bad rap with an Internet story doing the rounds and relating to the rapper’s assault charge.

Gucci Mane, indicted on a charge of aggravated assault on March 16 in an Atlanta nightclub has achieved another hit: an internet misrepresentation of what he alleged told a judge.

According to Internet gossip, his reply as to whether he was guilty of assault was to tell the judge: “Bitch I might be”, a line from his song “Pillz (Bight I Might Be)”.
but it was a doctored heading from a Fox news report.