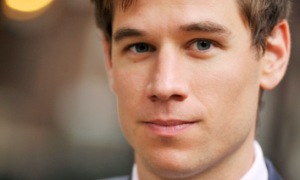 How sexist? How appalling? Men being judged by women and – not just that – male lawyers, barristers no less who are on a “hottie” list compiled by a couple of women who are evidently looking for a boyfriend. It’s like a little Facebook-in-Chambers.


The 21 barristers were put together through a list drawn up by a journalist and an art historian who were looking to date a barrister who they regarded as intelligent, articulate and attractive. As one said, “they ought to be honourable. In reality a lot are rather dull, so we thought this was a fun way of finding the nicest nes around”.

The pair, both London-based Americans, looked at the photographs and biographies of barristers on chamber websites and compiled a list of their favourites.

Patrick Hennessey, a former officer of the Grenadier Guards, author and now barrister, topped the list, which was published on Wednesday on yourbarristerboyfriend.tumblr.com.

The 31-year-old who works at 39 Essex Street chambers is described as “like Prince Harry but with brains. And attractive.”

He said: “Most unusually for a barrister, I’m speechless. It’s a tremendous honour and very reassuring to know that if the current misconceived and ham-fisted attempts at reform end up breaking the justice system altogether some of us at least have a sporting chance in an even older profession.”

“I just can’t say how enormously proud I am to have made this list,” he commented. “For any barrister this is the pinnacle. Unfortunately my wife says she prefers number 17.” 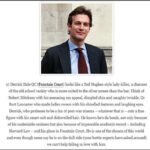 Number 2, Derrick Dale QC is said to be a “Ted Hughes-style lady-killer, a charmer of the old school variety who is more suited to the silver screen than the bar. Think of Robert Mitchum with h is menacing sex appeall, dimpled chin and naughty twinkle . . Derrick, who professes to be a fan of post-war cinema- whatever that is – cuts a fine figure with his msart suit and dishevelled hair. He knows he’s da bomb . . ”

You get the picture.