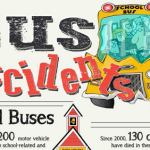 LawFuel.com – Best Law Firm Marketing and Newswire – According to the Department of Transportation, motor coaches make more than 750 million passengers trips each year in the United States. Statistics show that on average 17 passengers die each year while making these trips.

[wp_ad_camp_2]
The most dangerous bus accidents were rollovers causing 61% of deaths followed by running off the road and multi-vehicle collisions. The top three causes of these accidents were driver fatigue, driver error, and inattention. The fact that 69% of bus crashes are due to driver negligence highlights the importance of choosing the right bus to ride (i). The Federal Motor Carrier Safety Administration has addressed this concern by releasing an app called, “SaferBus.” It allows users to enter a company’s name and see its safety record over the last 24 months. To download the app click here.

Bus drivers should follow the best practices whether they are driving cross country for long hours, making routine stops in a city, or bringing children to school. According to the National Highway Traffic Safety Administration, on average 139 people die each year in school bus accidents. Since 2000 there have been 1,245 deaths that were “school transportation-related.” Of these deaths, 130 were children under the age of 19. More than 2/3 of these children were struck by school buses (ii).

Attorney Paul d’Oliveira stated, “Bus accidents are particularly serious because these vehicles usually carry dozens of passengers. Additionally, many buses are not required to have seatbelts and passengers may be standing or walking down an aisle when a collision occurs. Our law firm has been handling all kinds of motor vehicle accidents for more than two decades. We also have experience with insurance companies and we will fight to get you the money you deserve.”

The bus accident infographic provides statistics on bus accidents and reminds victims that they have legal rights. Passengers who have been injured in a bus crash should know that they may be entitled to compensation for medical bills, lost wages, pain and suffering, or other losses. d’Oliveira & Associates has been handling injury and disability claims in Rhode and Massachusetts for more than 24 years.

The law firm has successfully handled numerous motor vehicle accident lawsuits and there are no legal fees unless a settlement or award is obtained.