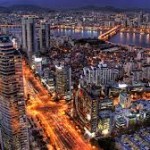 The Lawyer reports that of Korea’s top six law firms there was total revenue growth of 20 per cent over last year, with collective revenues of £657 million.

This compares with the returns from UK law firms showing a fall of two per cent for Addleshaw Goddard, a six per cent increase for Bird & Bird and Olswang lifting revenues by three per cent.

The growth in Asia is what is raising eyebrows, however, with an influx of foreign law firms including DLA Piper, Greenberg Traurig, Linklaters and Baker McKenzie among others.

The Lawyer reports:
“Given the globalisation and growth of the Korean economy, the demand for both legal services in Korea and advice on outbound investment by Korean companies will continue to increase greatly,” said Yoon & Yang’s founder and managing partner Hoil Yoon.

“It’s in the interest of everyone to have an open legal services market. There will be some more competition than in the past between Korean firms and foreign law firms for outbound work and later, eventually, for inbound work. But this increase in competition will result in the positive effects of increasing overall quality of legal services available in Korea and, at the same time, will make law practice more fun.