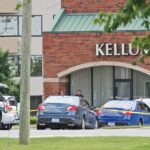 A man dressed in a bullet-proof vest shot an insurance adjustor outside the Kellum law firm in Greenville, North Carolina before crossing a busy five-laned road to begin shooting people in a Wal-Mart parking lot.

The man, in his 60s, was shot multiple times by police.

Greenville Police Chief Hassan Aden said police officers confronted the suspect and shot him after he fired at them. He said all those shot were undergoing surgery.