Meredith Connell has long changed since its days as Crown Solicitor, which it retains, but which has seen strong growth in its work as a commercial law firm.  Graduates report favourably on the culture and work quality the firm produces with generally generous pay scales and benefits.

Applications are invited from anyone in their last or penultimate year of study. Because the programme involves working part-time in either our Wellington or Auckland offices, it is realistically only available to Victoria and Auckland students.

Places are strictly limited and successful applicants will need to exhibit real exceptionality. That exceptionality should include demonstrated academic excellence and notable non-academic achievements in the arts, sports, cultural, leadership or otherwise. 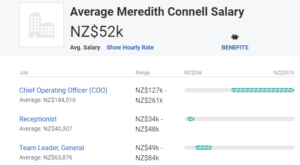 (Females to Male Partners/Directors as at LawFuel survey 2017)

Our interns are paid the same as law clerks and are a full part of our team. So, don’t worry – we won’t hold back on any of the social and learning benefits available to all our staff.