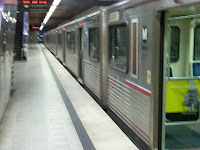 LOS ANGELES—Denise Tyrrell was the famous Metrolink spokesperson who declined to comment on Metrolink’s scapegoat tactics back in 2005, when it tried to blame the Sheriff’s Department for the fatal train accident in Glendale. Readers will recall that Los Angeles County was in the process of suing Metro-link because Metrolink was/is trying to make Los Angeles county assist in paying the costs of a civil lawsuit filed by victims of a fatal Metro-link derailment in 2005.

Los Angeles County filed the lawsuit some time ago, but basically is saying that the County is not responsible for defending any Metrolink lawsuits, or paying insurance claims on behalf of Metrolink.

The Metro rail authority claims LA County is at least partially at fault for the derailment since the Sheriff’s Department didn’t stop a man from parking his motor vehicle on the Metro railroad tracks, which caused a fatal collision back in Jan. 26, 2005, in Glendale, California.

That Glendale train crash derailment caused 113 lawsuits as against Metrolink for negligence, failure to make reasonable inspections and willful neglect.

According to the LA county’s cross claims, Metrolink’s claim should be denied because Los Angeles County in no way failed to do its job and that it would have been impossible to prevent the crazed felon from doing what he did. Back then, Metrolink spokeswoman Denise Tyrrell declined to comment on the case back then. But she isn’t clammed up anymore.

In fact, since then, she has blown open Metrolink, and will likely help passengers injured in the September 12, 2008 Chatwsorth Metrolink crash as a witness.

“There’s a disagreement over what the contract stipulates, and who’s going to pay in the case of this kind of litigation,” Tyrell said regarding the Glendale train crash. “We hope the situation can be resolved.”

The lawsuit, also names Metrolink’s insurance company Lloyd’s of London. We are hoping Tyrrell. The question is, will she break her silence now and help the victims of the 2005 Metrolink accident as well as the victims of the recent train crash in Chatsworth?