You are here: Home / Latest News / A Law Firm With A Pro Bono Business Case 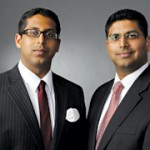 Pro bono work is common for a great many firms, but for the Boston law firm of Dhar Law the brothers who run it are focused on pro bono work and they have some imaginative and ambitious plans ahead, as Forbes’ Anne Field reports.

Started three years ago by Vila and Vikas Dhar, two brothers,  the firm handles a variety of traditional work from business law and strategic advice to civil litigation. Its real aim, however, is to do pro bono cases. And, to that end, it just launched something called The Next Mile Project, a 5,000 -square- foot space that serves as a co-working and collaboration site for as many as 30 or so nonprofits of various sizes.

In fact, while a plethora of incubators and accelerators for for-profits, including some aimed at social enterprise, have sprung up–some of which I’ve covered there hasn’t been the same activity aimed only at nonprofits. And certainly not spearheaded by a traditional law firm.

How did it happen? Vilas Dhar spent much of his time as a law student at New York University involved in human rights-related work. Through the Center for Human Rights and Global Justice, which is based at NYU, he spent a summer working in India addressing child labor issues–specifically, a research project looking at how to use mobile technology to create maps showing cluster of areas with a high incidence of child labor, the better to find patterns and provide children with more protection. He also spent eight months studying in Singapore, but working primarily in Cambodia and Laos, where he looked at how the use of technology could help develop hybrid models of microfinance.

“I spent a lot of time seeing how technology can affect development and change,” he says.

When he moved to Boston in 2006, Vilas did what most newly minted J.D.s do: He joined a big law firm, where he focused primarily on venture capital and technology-related work. At the same time, he got to talking to his brother, who was at another law firm, about “how silly what we were doing was,” he says. “Law firms take these really smart people and just turn them into hourly billing machines.”

Three years ago, they decided to stop the madness and start their own law firm, one that would do the work of a usual legal enterprise but also would “be a force for creating positive social impact,” says Vilas. So, its traditionally oriented billing would help subsidize its work for nonprofit and governmental clients. Specifically, while many law firms do about 3% to 5% of their work pro bono, Dhar Law would devote 40% of its time to such efforts, according to Vilas.

What they didn’t realize was just how complex some of that work would be.  “These groups needed the same level of business and legal strategy we were giving to our for-profit clients,” says Vilas.  For example, for one nonprofit, they came up with an innovative model for solar financing, raising $4.5 million through a “structure as complex as any oil and gas drilling transaction,” he says.

Then, the brothers got another idea. The nonprofits they worked with or just observed didn’t have the same support and resources available to many other startups. The answer: Create their own community, a 501(c)3 that would foster collaboration among nonprofits and provide working space and mentoring. Cost: $150 to $250 a month, “mostly to pay for snacks,” says Vilas.

As of now, there are 12 organizations, ranging from two-person newbies to a 150-person enterprise that does health-related work in Liberia. This mix is intentional. The idea is to have rangy startups with new ideas interacting with more established organizations.

The work space is, as you might expect, an open, communal-style design typical of co-working spaces, to make collaboration easier. The nonprofits don’t live in their own ghetto, either. They’re  interspersed along with other members of the firm.