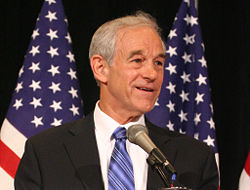 LawFuel.com – From Ron Paul – Here’s some news you’ll never see on your TV: together, we’re about to create a media revolution.

We’re launching The Ron Paul Channel — a media network dedicated to pursuing and reporting on the truth, fostering meaningful conversations, and celebrating the values that you and I agree must be restored in order to restore our great republic.

Let me show you an exclusive look at the set of the Ron Paul Channel. Watch this short video, then sign up to be the first to know when we launch.

The mainstream media and big government have chipped away at our freedom of speech and the press. Meanwhile our government is more secretive than ever.  The NSA and IRS have crossed the line into our personal lives that the Founding Fathers could never have anticipated.

Forcing transparency, providing accurate and timely reporting, and sharing analysis about what’s actually going on! There are some in mainstream media who have been asleep at the switch. So we are taking on the challenge, because you deserve the truth.

The Ron Paul Channel will be a platform for the uncensored, and sometimes ugly, truth that you won’t see anywhere else. We’ll feature the boldest, most fearless patriots and bring you the news and information everyone else is afraid to cover. We won’t play favorites. We will invite guests who have differing points of view and here’s an idea—we will engage in an honest conversation, or even debate, about the issues. We won’t be influenced by advertisers, and we won’t be censored. The Ron Paul Channel will be OUR channel! And the channel for the Truth.

If I know anything about the commitment of so many supporters of liberty like you, it’s this:

Together we’ll change more than just the information people get about the world around them — we’ll change the future of the country we love so much.

I sincerely hope all of you will join me in this patriotic experiment to change the media landscape.

Watch my video and sign up so you don’t miss the full launch of the Ron Paul Channel: