You are here: Home / Legal Opinion / Out of the Rosenbergs’ Execution Comes Some Good

Robert Meeropol and Jenn Meeropol and the son and granddaughter of Ethel and Julius Rosenberg. From The Guardian. 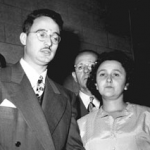 We are Robert and Jenn Meeropol, son and granddaughter of Ethel and  Julius Rosenberg.  We are acutely aware of the political lessons to be drawn from the conviction and execution of the Rosenbergs at the height of the McCarthy period. The charge was conspiracy to commit espionage, but our family members were presented as traitors who gave the Soviet Union the secret of the atomic bomb.

The US government used the Rosenberg case to attempt to prove to the public that the international communist conspiracy threatened the American way of life, and claimed fighting communism required that human rights and civil liberties take a back seat to national security.

Today, the US government asserts that danger from the international terrorist conspiracy and their weapons of mass destruction justifies massive surveillance, indefinite detention and even torture. Authorities say we must guard national secrets even more securely to avoid destruction. Today, the issues raised by the Rosenberg case resonate from the Oval Office of the White House to Bradley Manning, who is being tried under the Espionage Act of 1917, as were Ethel and Julius.

But there are other, more personal, lessons to draw as well.

From the ages of three to seven, I, Robert, lived a nightmare. After my parents’ arrest, relatives were too frightened to take my brother Michael and me into their homes, so we were dumped in a shelter. After the executions, we were thrown out of the New Jersey state school system when local residents found out about our parentage.

In 1954, in a politically motivated attempt to separate us from Rosenberg supporters, Michael and I were seized by New York City police from the home of our prospective adoptive parents and placed in an orphanage. But Abel and Anne Meeropol won the ensuing custody battle, our last name was changed to theirs, and we dropped from public sight for almost two decades. During those growing-up years, I dreamed of revenge.