Richard L CassinRichard L. Cassin helps clients comply with the Foreign Corrupt Practices Act and other U.S. laws, and regularly assists companies facing compliance issues. He was named one of the 100 Most Influential People In Business Ethics in 2010 and 2011 by Ethisphere Magazine, and the FCPA Blog — which he created — was listed by the Risk Management Monitor as one of the ten best risk-management and insurance-industry blogs.

A covert recording from March seems to capture News Corporation chairman Rupert Murdoch suggesting that bribery is part of the Fleet Street culture.

The tape was made during a visit by Murdoch with the staff of his Sun newspaper in London.

On it, Murdoch is also heard saying, ‘The cops are totally incompetent.’

More than a dozen journalists from News Corp.’s U.K. papers have been arrested on suspicion of bribing U.K. police and officials in return for confidential information.

The company is the subject of an FCPA investigation by the U.S. DOJ and SEC.

‘Although Murdoch does not admit to knowing that any of his employees specifically paid officials,’ the Guardian said, ‘he is recorded as saying the culture of paying public officials for stories “existed at every newspaper in Fleet Street. Long since forgotten. But absolutely.”‘

Disclosure of the tape has prompted at least one British member of Parliament to call for News Corp’s prosecution under the FCPA. 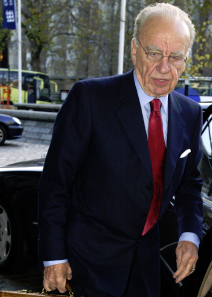 Chris Bryant, a prominent Labour MP who received damages for phone hacking by News Corp’s now-shuttered tabloid News of the World, said the tape is ‘another reason for the FBI to take action under the Foreign Corrupt Practices Act, which makes it an offense for American companies to pay public officials on foreign soil,’ according to the Guardian.

In a statement, News Corp said Murdoch didn’t know about any payments by journalists.

In August last year, Murdoch sent a compliance manifesto to all of his employees, setting out plans to strengthen News Corp’s antibribery training and reviewing its compliance programs because of the phone hacking and bribery scandal.

The Wall Street Journal (also owned by News Corp), said in March this year the FCPA investigation was nearly complete and U.S. criminal charges against individuals at News Corp were unlikely.