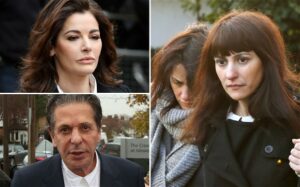 UK reports indicate the police will not investigate the television cooking show hostess over drug offenses.

The Telegraph reprots that Francesca and Elisabetta Grillo were found not guilty on the jury’s second day of deliberations at Isleworth Crown Court in west London and  cleared of defrauding Charles Saatchi out of £685,000 they spent on company credit cards issued in the art collector’s name.

Neither of the defendants was in court to hear the verdicts because Elisabetta had been taken ill and was allowed by the judge to rest elsewhere in the court building.

On Thursday afternoon Elisabetta, who had been unwell at various times during the trial, fainted after suffering a panic attack and was taken to hospital by ambulance, though the jury were not told about her hospital visit.

The verdict vindicates the sisters’ claims that all of their spending on the company credit cards had been authorised by Miss Lawson, for whom they worked for more than 10 years.

In a statement released after the verdict, Miss Lawson said: “I am disappointed but unsurprised by this verdict.

“Over the three-week trial the jury was faced with a ridiculous sideshow of false allegations about drug use which made focus on the actual criminal trial impossible.”

The judge had told the jury they had to consider whether Miss Lawson, who admitted taking cocaine and cannabis when she gave evidence, had been “off her head” on drugs when she gave authorisation for the spending.

The sisters’ barristers had told the jury they had been “caught in the crossfire” of the fallout from Miss Lawson and Mr Saatchi’s bitter divorce, and that the trial was being used by the former couple to fight each other “by proxy”.