LA Correspondent – Dostoevsky’s classic Russian novel, Crime and Punishment, regarded as one of the supreme achievements in world literature, focuses on the mental anguish and moral dilemma of a man who kills someone in cold blood simply for money.

Los Angeles-based Russian billionaire Sergey Grishin, (right) dubbed the “Scarface” Oligarch because of his purchase of the Scarface mansion in Santa Barbara, does not appear to suffer from the same moral compunction as Dostoevsky’s hero.  Nor has he yet been punished for his admitted crimes or his alleged crimes.

Grishin is a mysterious figure who keeps a very low profile.  Except when it comes to battling his ex-wife Anna Fedoseeva and her business partner Jennifer Sulkess.  Grishin sued the two women for an alleged oral loan to make a low budget movie which he claims had to be repaid before filming commenced.  They countersued him for making death threats, attempted murder, trying to hire a hitman, and false imprisonment.  The lawsuits have revealed a treasure trove of information.

We have previously written about Grishin’s elaborate alleged death threats and promises that he will wait for years to implement his plans, including from beyond the grave.

If their allegations are true, the secretive billionaire has committed numerous crimes on U.S. soil, and against an American citizen, and with a brazen contempt for American law.  It appears that Grishin is untroubled by breaking the law, especially given his video confessionals, and the detailed evidence which Grishin has not refuted because he has asserted the Fifth Amendment.

Grishin’s Confession to Crimes in Russia

Grishin’s alleged crimes in Russia have received extensive publicity, including a television show which broadcast clips from a video Grishin made where he confessed to masterminding the theft of $60 billion from the Russian Central Bank and numerous articles about his alleged attempt to kill his wife.

After masterminding the theft, Grishin migrated to the U.S. and obtained permanent residency. He now resides in Los Angeles.  While Grishin currently has a low profile in the U.S. that wasn’t always the case. After he moved to the U.S. in 2008, he made a splash when he bought the Scarface mansion, which he sold for a steep loss.

Fraud Claims Against Grishin and Associates In The U.S.

Grishin disappeared from the public eye after he and two alleged co-conspirators were sued for committing insurance fraud.  Zurich American Life Insurance Company sued Grishin and his business associates Dovi Frances and Tim Pinkevich, who were the alleged beneficiaries of the policy and who allegedly procured a $20 million “key man” life insurance policy on Grishin’s life.

The three men strongly deny any wrongdoing. The case was eventually settled out of court, according to court filings, and ultimately dismissed.

Tim Pinkevich is currently the President of Grishin’s company SG Acquisitions and the Trustee for Grishin’s Bombardier jet.  Israeli-American Dovi Frances was the financier who helped Grishin procure the $201 million life insurance policy. He was also the President of Grishin’s company SG Acquisitions, and a partner with Grishin in a venture capital fund.  He is currently a venture capitalist with Group 11, and one of the “Shark Investors” of “Shark Tank” in Israel.  In a not so surprising coincidence, Frances and Group 11 also appear to be represented by John Pierce of Pierce Bainbridge, the real life “The Firm,” which we have covered extensively.

It appears that Grishin associate Dovi Frances became a client of Pierce Bainbridge about the same time that another one of the firm’s clients, Rudy Giuliani, pocket dialed a reporter and left a voicemail saying that he “needed money.”

The “Illegal” Arrest of Grishin’s Ex-Wife

Grishin’s ex-wife Fedoseeva was arrested and imprisoned before being released because of the public uproar in Russia that Grishin had resorted to the criminal courts to avoid alimony. Fedoseeva was released from prison after 10 days, and the Russian authorities subsequently found that her arrest, which was precipitated by a complaint filed by Grishin, was “illegal.” Fedoseeva has produced text messages from Grishin that he will imprison her “whatever it costs.”

Sulkess brought public attention to Fedoseeva’s plight when she posted Grishin’s video confession of the theft from the Central Bank along with clips from some of his death threat videos.

Grishin then copyrighted the videos and sued Sulkess for copyright infringement, defamation and invasion of privacy. Grishin’s “assassin” lawyers at Pierce Bainbridge issued a press release in 2019 about his $50 million lawsuit against Sulkess.  Sulkess prevailed on an anti-SLAPP motion against Grishin and his $50 million lawsuit has been dismissed.

The only remaining legal battle is the case in Los Angeles Superior Court, where Grishin alleges that money he gave Fedoseeva was an “oral loan” to make a movie which he claims had to be repaid before filming even started.  Fedoseeva claims that the money he gave her during the marriage were gifts to her, and that Grishin’s lawsuit is spurious.  Grishin appears to have confessed as much, texting her that he will file “counterfeit” lawsuits against her:

“There will be counterfeit lawsuits, under other clauses. Don’t forget that. Are you going to fight with me?”

Fedoseeva and Sulkess countersued Grishin.  Their court filings refer to numerous allegations regarding text message death threats and threats of imprisonment, attempted murder, an attempt to hire a hitman, stalking in violation of U.S. law, audio and video recordings of him having sex with prostitutes, and false imprisonment.

Perhaps the most chilling evidence presented by the two women is Grishin’s alleged “hitman” audio where he records himself saying that he wants to “get rid of some people” at a cost of 1 million euros per head.

The official translations from an alleged hour and half long audio that Grishin recorded and sent to Fedoseeva’s mother is attached here. [attach hyperlink].

A pleading filed by the two women details Grishin’s malevolence: 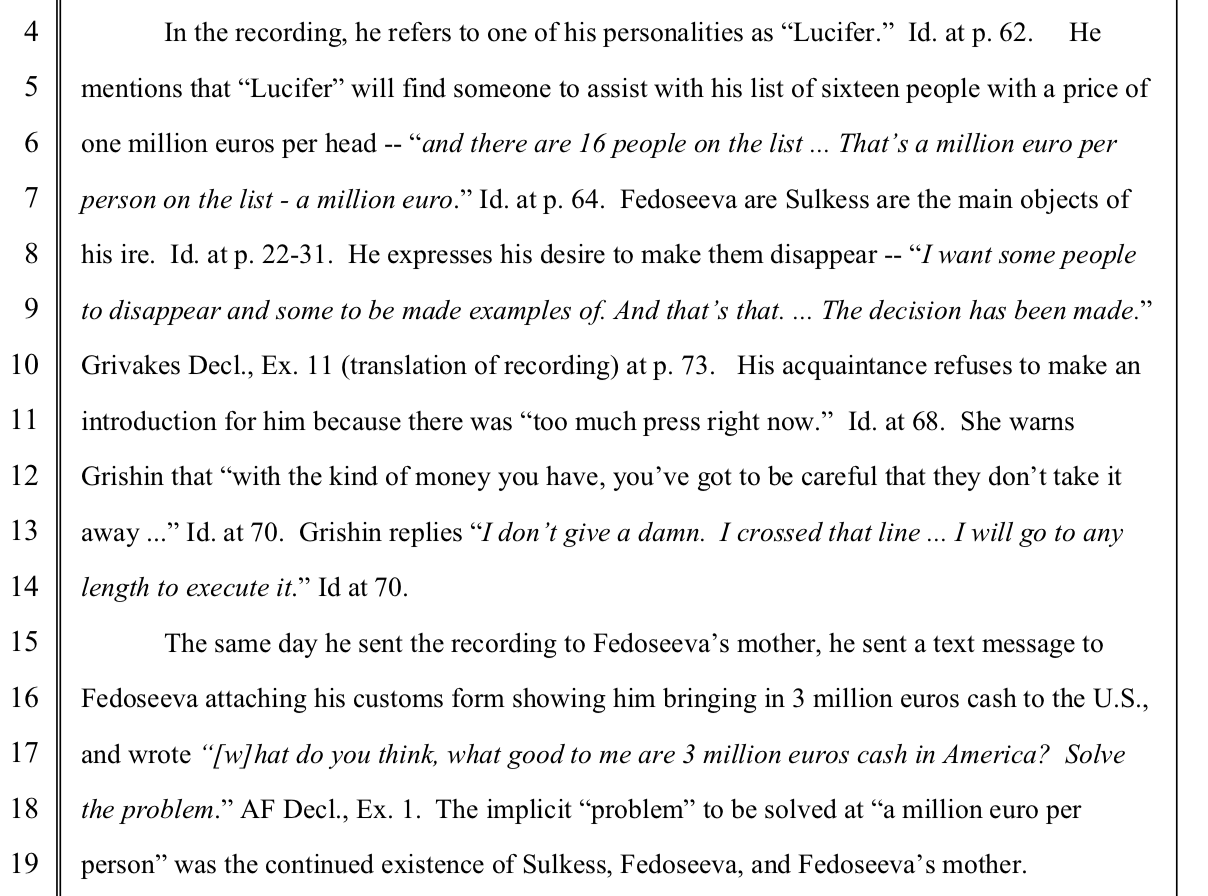 Grishin’s Alleged Crimes in the U.S.

Fedoseeva and Sulkess allege that Grishin committed the following crimes against them:

Grishin’s has asserted his rights under the Fifth Amendment.

“Fedoseeva, I don’t care about your petition to an American court regarding your labored restraining order. You’re physically located in Bumfuck Egypt with the other cunts. While I’m flying over the Atlantic. But the supreme law of the United States, the Constitution, the Law of the Land! So go fuck yourself!”

“And don’t forget, now we are in a civil court. At the earliest opportunity, I will strive to start the case in the criminal justice system. In America, it’s not easy. At all. But I will, my word to you. I rule everything, remember that. To everyone and to all people and their lawyers. And you know me at least a little bit. My advice is to hire the best of the best to fight me. It’s expensive. But here, there is no way out.”