During Past two Years, 43 Defendants Linked to Inland Empire’s Old Quest Foundation Have Been Convicted, Including Attorney and Seven Tax Return Preparers. 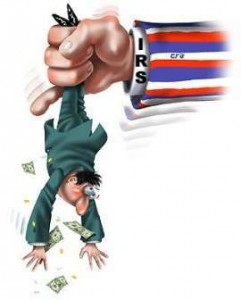 SANTA ANA, California –Concluding sentencing proceedings in which he was already ordered to serve a 14-year prison term, the former leader of the Fontana-based Old Quest Foundation was ordered on Friday to pay $2,925,620 in restitution in relation to a tax fraud scheme that resulted in more than 400 fraudulent federal income tax returns being filed with the IRS that cumulatively sought more than $250 million in fraudulent refunds.

The scheme run out of Old Quest was the largest tax refund fraud in history involving misuse of Original Issue Discount tax forms. The case against Ruiz and the other Old Quest defendants stems from Operation Stolen Treasures, an investigation conducted by Special Agents with IRS Criminal Investigation that led to 55 people being indicted by a federal grand jury in the fall of 2011.

Ruiz, who was the chief executive officer of Old Quest, was convicted at trial in January 2013 of one count of conspiracy to defraud the United States and 41 counts of filing false claims against the United States, including four of his own false federal tax returns. Old Quest’s president and second-in-command, Francisco J. Mendoza, also was convicted during the January trial, but died shortly before he was scheduled to be sentenced in November 2013.

Old Quest promoter Arturo Villarreal-Alba, 45, of Whittier, who was previously sentenced to eight years in prison, was ordered on Friday to pay $462,239 in restitution to the IRS.

The evidence presented at Ruiz and Mendoza’s trial and in court documents showed that Ruiz fraudulently told Old Quest customers they each could receive hundreds of thousands of dollars in tax refunds by accessing “secret government accounts” through a process that included the filing of IRS Forms 1099-OID. During presentations made across Southern California, members of the Old Quest conspiracy promoted the secret account theory and other “tax defier” arguments. In an attempt to give legitimacy to the scheme, Ruiz falsely told customers who attended seminars that Old Quest had employees who were attorneys, accountants, CPAs, and former IRS employees. Taxpayers who signed up were required to pay Old Quest fees as high as $10,000, and they were required to promise to “donate” to Old Quest 25 percent of any tax refunds they received.

In exchange for the payments, Old Quest prepared and filed false income tax returns, which routinely sought hundreds of thousands of dollars – and sometimes millions of dollars – in income tax refunds. In some cases, Old Quest filed multiple false tax returns on behalf of customers. During a search warrant executed at Old Quest’s offices, special agents with IRS Criminal Investigation seized several unfiled tax returns, including one signed tax return that falsely reported $10,500,106 in federal income tax had been withheld and fraudulently claimed a $6,868,675 tax refund. Although the IRS stopped most of the false refunds before they issued, several very large refunds issued, including one for $1,192,653.

Bank records and other evidence showed that Old Quest received approximately $2 million from customers who used the fraudulent OID scheme, as well as from tax refunds erroneously issued by the IRS. The evidence also showed that while IRS agents were searching Old Quest’s offices, Mendoza emptied more than $250,000 from one of Old Quest’s bank accounts, and then Ruiz hid those funds from authorities by depositing them into another bank account in a different name.

When customers received IRS letters warning that their tax returns were frivolous, Old Quest employees assured customers that the IRS sent letters only to “intimidate” them because the “IRS did not want to pay” after several refund checks were erroneously issued and the IRS froze the bank accounts of the customers who had received them, Ruiz instructed their employees to open new accounts for customers at different banks in an attempt to avoid further IRS scrutiny. The IRS search of the Old Quest offices and computers in September 2009 revealed numerous emails and printouts of IRS publications warning of the exact same scheme that Ruiz was promoting.

Prior to the tax refund scheme, Ruiz had promoted a “land patent” program to many of the same customers, according to the evidence introduced at his trial. Under this fraudulent program, Ruiz promised to eliminate the customers’ mortgages through an obscure and mysterious process, again in exchange for substantial fees. The land patent program quickly failed, and dozens of customers lost their homes to foreclosure. In addition to selling the fraudulent schemes to customers across the Southland, Ruiz and Mendoza failed to report hundreds of thousands of dollars of their own income, and Ruiz filed several false federal income tax returns for himself that fraudulently sought refunds. The evidence at trial showed that Ruiz bragged about not paying taxes for more than 25 years.

Of the 55 defendants indicted as part of Operation Stolen Treasures, seven have been convicted at trial (which includes Mendoza), 36 have pleaded guilty, two have agreed to plead guilty, and eight are pending trial. One defendant remains a fugitive, and one defendant was acquitted.