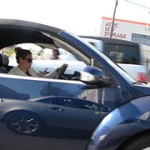 LawFuel.com – Best Law Firm Newswire – On December 29, 2009, an 18-year old woman named Kassy Kerfoot was driving to her friend’s house in Meridian, ID. She routinely sent text messages while driving, countering admonitions from her mother about the practice by claiming that she was so experienced that she could do it quickly, thus presenting no hazard to herself or other motorists. That day was no different in her eyes, despite the rush hour traffic. When she looked up from sending her text message, she saw traffic stopped in front of her. Since she knew she could not stop in time, she swerved to avoid the collision. Unfortunately, she lost control of her vehicle and collided with two oncoming cars.

Kassy died five hours later after suffering traumatic brain injuries. While some texting and driving accidents do not result in such tragic consequences, many result in permanent and disabling injuries. In Salinas, CA in 2012, 23-year old Stephanie Sablan lost control of her vehicle while texting and driving as she approached a curve, suffering paralysis and almost costing her her life. Such accidents and the resultant lost limbs, brain damage, and paralysis are all perfectly avoidable. Whether you ask an accident lawyer Manhattan or Brooklyn based, you will hear that those who cause such accidents and survive often harm others, resulting in criminal charges  or expensive litigation, therefore needing representation.

Alternatives to Texting and Driving

Texting and driving poses several unique threats to the motorist and others around him or her. It disrupts the driver’s cognitive functioning, as they must read the keypad and interpret messages that they are sending and receiving. It takes the driver’s vision off the road for an average of five seconds for the same reasons. The texting party must also strike the right inputs on the phone, which requires concentration and dexterity that would otherwise be applied to driving.

Even mobile phone usage while driving does not present such dangers. A hands-free communications device provides a simple alternative to sending text messages. Hands-free phone calls are legal in all states even while driving, as they allow drivers to avoid fumbling with a physical device and allow them to keep both hands on the vehicle’s controls. Anyone who must communicate while driving would do well to use this method. However, such calls still distract the driver, requiring his or her attention.

The ideal approach is to not text or talk while driving. Some modern Android and iPhone apps allow users to set the phone into a driving mode, in which the device will send automated text messages in response to other text messages. These messages will notify the other parties that you are driving and would prefer not to be distracted. Some of these applications will not allow the messages to be read until the user sets the phone back into standard mode. Alternatively, one could just leave the phone on and ignore it, set it to vibrate only and ignore it, or turn the phone off until the destination is reached.

What Should Victims of Texting and Driving Accidents Do?

Unfortunately, not everyone is willing to listen to reason and texting and driving accidents will continue to happen no matter how many injuries result. The victims left in the path of such negligent drivers will typically be relegated to recovering damages against the texting party’s insurance company or filing a civil action against him or her. In the event that the victim’s injuries are serious, such as paralysis or the loss of limb, the victims may be unable to perform the work that they performed previously. This can place victims under significant financial pressure.

Victims of texting and driving accidents should seek medical attention as soon as possible. Even minor accidents commonly result in minor pain and soreness; while this minor discomfort presents little long-term threat to the victims, such injuries can mask more serious harm, which can become aggravated by virtue of not being treated. Seeking medical attention quickly allows victims to identify and begin treatment for potentially life threatening injuries.

Victims should then consult with an experienced personal injury attorney in their area. Insurance companies will normally offer some sort of compensation that is below the direct costs of the injury and always fails to account for the victim’s pain and suffering. Such reduced settlements can seem attractive to victims under financial pressure and insurance companies know it. By consulting with an attorney, victims may ensure that their rights are respected and that they receive the level of care that they need, rather than the level of care that the insurer wishes to provide.

Licensed and experienced legal counsel may also assist victims in the event that the texting party lacks insurance. According to USA Today, 13.8 percent of American drivers do not have insurance; most of these people own mobile phones. Without adequate legal representation, victims may be forced to proceed to their own insurance company for compensation, which again raises issues of coverage and adequate compensation. With adequate legal representation, victims can review their situation and whether recovery may be possible against the other driver, the victim’s own insurer, and any other third party.

Stories similar to Kassy and Stephanie’s situations above are distressingly common. In 2011, 3,331 people died as a result of a distracted driver with text messaging being the primary source of such distractions in many cases. Many more were seriously injured. Those who send text messages, check e-mail, and perform other functions with their mobile phones while operating their vehicles create a hazard to other drivers that leaves real victims in its wake. American victims who suffer injuries at the hands of such careless drivers have access to the best medical and legal care in the world. Victims are encouraged to take advantage of both.
Having several friends who have injured others by driving and texting, Jennifer Alston is very passionate about the need to inform others of the risks. She’s found that an accident lawyer Manhattan based can assist you if you have been involved with a texting and driving accident in New York, and help to explain your rights and give you proper representation.