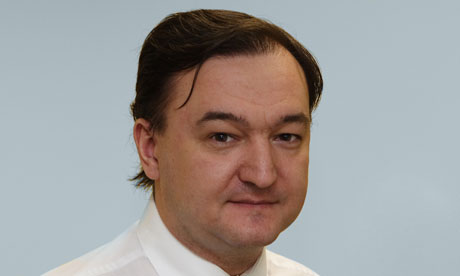 Sergei L Magnitsky was a Russian lawyer who went to jail after he exposed tax fraud.  Unfortunately, he died four years ago.  So why would he be our Featured Lawyer?  What makes him relevant today?  It’s because Sergei Magnitsky is undergoing a posthumous prosecution, as the New York Times records:

The steel cage reserved for the defendants was empty Thursday, which was not surprising since one of them is dead and the other lives in London. As the judge, his voice nearly inaudible, read out his verdict, one of the main defense lawyers paid no attention, tapping nonchalantly on his tablet computer instead.

If the posthumous prosecution of Sergei L. Magnitsky, the lawyer who was jailed as he tried to expose a huge government tax fraud and died four years ago in a Russian prison after being denied proper medical care, seemed surreal from the moment the authorities announced it,  the verdict and sentencing on Thursday did not disappoint.

By all accounts, it was Russia’s first trial of a dead man, and in the tiny third-floor courtroom of the Tverskoi District Court, it took the judge, Igor B. Alisov, more than an hour and a half to read his decision pronouncing Mr. Magnitsky guilty of tax evasion.

Mr. Magnitsky was convicted along with a former client, William F. Browder, a financier who lives in Britain and was tried in absentia on the same charges. Mr. Browder, once Russia’s largest foreign portfolio investor, was sentenced to nine years in prison — a sentence that he will almost certainly never serve. Interpol in late May refused a request by the Russian government to track Mr. Browder’s whereabouts, a relatively rare instance of a law enforcement inquiry’s being set aside as politically motivated.

Mr. Browder, who has been barred from Russia since 2005, said in a telephone interview from London on Thursday that he believed that the Kremlin was acting out of desperation.

He added: “We exposed it and opposed it. And as a result, he is dead and I am sentenced to nine years in absentia.”

Mr. Browder said that he would not take any new precautions as a result of the verdict, but that he had long stopped traveling to countries he regards as close to the Russian government for fear of being detained.

Mr. Magnitsky’s death — and the Kremlin’s refusal to hold anyone responsible for either his treatment in prison or the fraud he tried to expose — has drawn international condemnation. It also set off a major diplomatic row with the United States, which late last year adopted a bill named after him that bars Russian citizens accused of human rights abuses from traveling to America or maintaining financial assets there.

Russia retaliated by approving a law putting reciprocal restrictions on Americans accused of rights abuses and barring the adoption of Russian orphans by American citizens.