You are here: Home / Latest News / US Law Firms Need To Shrink and Re-Think, Says Study 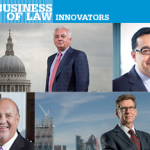 US law firms continue to suffer from the recession and the global financial crisis, with a drop in demand for legal services, greater scrutiny of legal bills and an overall need for “Big Law” to become “Smaller Law”.
[wp_ad_camp_1]

The Citigroup Law Watch Quarterly report, reported by Bloomberg Law on Tuesday showed a modest increase in law firm revenues, which was encouraging for lawyers, driven largely by greater M&A activity. However, analysts indicate that the increase in revenue does not necessarily act as a harbinger of the good times returning.

“The third quarter last year was quite weak, while the fourth quarter was unusually strong,” says Gretta Rusanow, a senior client adviser at Citi’s Law Firm Group. “That performance led to overall growth in revenue for 2012, because all the work that was done last December” tied to uncertainty over taxes in 2013. “So you’ve got that unusually strong base quarter to contend with.”

None of the mildly optimistic results in the Citi and Wells Fargo reports—operating expenses, for instance, remained essentially flat through the end of the third quarter, and the billing collection cycle shortened—do much to alleviate the burden of too many lawyers and not enough work to go around. And while increases in lawyer head count slowed (from the second to the third quarter) and equity partner head count dropped slightly (by 0.3 percent in the first three-quarters, compared with the same period in 2012, according to Citi’s numbers), those cuts don’t adequately address the problem. Productivity today suffers from a gap of roughly 100 billable hours annually per lawyer from the five years before the recession—equal to about 6.5 percent excess capacity. Most of that, says Rusanow, is concentrated in the ranks of income partners and of counsel.

“Despite the head-count adjustments firms took, post-recession, we still see this persistent excess capacity,” Rusanow says. Wells Fargo’s Jeff Grossman put it more bluntly in an interview with The American Lawyer: “Not enough partners are being asked to leave.”

It’s a familiar story: law firms operating in a state of denial. It was in full view in the failures of law firms Howrey in 2011 and Dewey & LeBoeuf in 2012. When will reality finally set in?