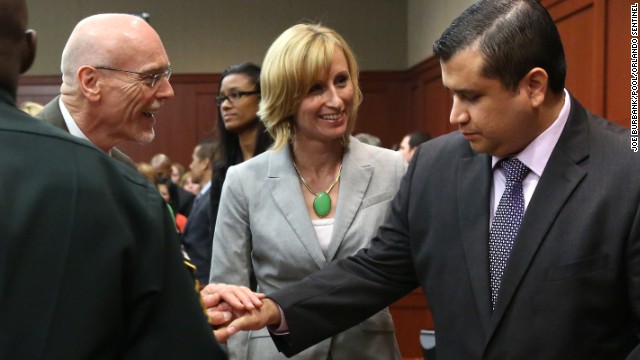 The acquittal of Neighbourhood watch volunteer George Zimmerman created a mixture of shock and delight.

Zimmerman was cleared of all charges in the shooting of Trayvon Martin, the unarmed black teenager.  The shooting created fury and debate across the country with issues about  racial profiling, self-defence and equal justice.

Zimmerman could have been convicted of second-degree murder or manslaughter.,  however the jury, who comprised six white women, reached a verdict of not guilty after deliberating more than 15 hours over the course of two days.

Martin’s mother and father were not in the courtroom when the verdict was read; supporters of his family who had gathered outside yelled ‘‘No! No!’’ upon learning of the not-guilty verdict.

What were the issues that lead to the acquittal?  These are five, according to CNN’s report on the controversial case.

Did the prosecution make a mistake in filing a second-degree murder charge against Zimmerman?

“I think the problem was they overcharged it in the very beginning,” said Holly Hughes, a criminal defense lawyer who was not on Zimmerman’s legal team. Had prosecutors started with the manslaughter charge, the outcome may have been different, she told CNN.

Second-degree murder is defined as a killing carried out with hatred, ill will or spite, but is not premeditated. To convict Zimmerman of manslaughter, jurors would have had to believe he “intentionally committed an act or acts that caused the death of Trayvon Martin.”

Questions surfaced about whether the charge was appropriate because knowing a person’s feeling during a killing is difficult to prove.

As a result, the prosecution had to rely on the evidence to tell the story of what happened and what led to the shooting, HLN’s Ryan Smith said.

Without an abundance of evidence, proving the case was difficult for both sides.

Former Los Angeles County prosecutor Loni Coombs emphasized that jurors did not find Zimmerman innocent; rather, they found him not guilty. There’s a difference, she told CNN’s Don Lemon.

“They’re not saying he’s innocent, they’re just saying they couldn’t prove beyond a reasonable doubt, and therefore the law gave them no choice but to write ‘not guilty,'” Coombs said.

— Total number of witnesses called to the stand: 56.

— 911 calls played in the courtroom: Three (Zimmerman made a call to the non-emergency line).

— Statements about the shooting made by Zimmerman: Seven.

— Number of jurors who decided Zimmerman’s fate: Six — all women; five are white and one is black/Hispanic.

Zimmerman’s account of what happened the night of the shooting was a central part of the trial. He was the only living person who witnessed the entire incident, and there wasn’t much physical evidence for either team to fall back on.

Much was made during the trial about why there was so little blood on Martin and Zimmerman, who said he fired in self defense because he was being beaten and feared for his life.

Dr. Vincent Di Maio, a former medical examiner in San Antonio and an expert on gunshot wounds, testified that the rain could have washed away and affected evidence collected from Martin’s hands.

Attorney Faith Jenkins said it doesn’t matter what a prosecutor believes if he or she doesn’t have adequate evidence.

“Trials are not necessarily about the truth all the time,” the former prosecutor told CNN. “It’s about what you can prove in court.”

There was so little evidence available that the defense put together an animated video to re-enact the events of that night based on witness statements, police reports and Zimmerman’s account, they said.

The judge ruled against the use of the video.

3. The teen who spoke to Martin

She was on the phone with Martin moments before he was shot and was considered a key prosecution witness. But Rachel Jeantel initially resisted coming forward.

“She did not want to get involved in this in no way possible,” Martin family attorney Benjamin Crump told reporters Saturday.

During two days of testimony that was at times tense and combative, Jeantel described her conversation with Martin.

Jeantel testified that Martin told her he was being chased by a “creepy-a** cracker.”

“This was a disaster,” criminal defense lawyer Mark Geragos to;d CNN’s Anderson Cooper the day Jeanteal testified. “This was the star witness, the star witness. The wheels came off and it was a train wreck. And there’s no other — there’s no way to soft-pedal it.”

4. The voice on the call

The mothers of Zimmerman and Martin both testified that screams for help heard on a 911 call the night of the shooting were those of their sons, respectively.

On July 5, in a packed courtroom, the prosecution played the recording for Martin’s mother, Sybrina Fulton.

When asked if she recognized the voice, Fulton said it belonged to “Trayvon Benjamin Martin.”

Hours later, the defense called Gladys Zimmerman to the stand, where she testified the voice screaming for help belonged to her son.

As a result, there was no definitive answer for jurors.

The lead detective in the case, Chris Serino, was called to the stand by the prosecution.