Marian Wright Edelman is President of the Children’s Defense Fund and its Action Council whose op-ed piece appears in the Huffington Post. 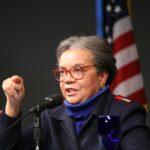 The reaction to the not guilty verdict from George Zimmerman’s jury was swift and strong. Young people poured onto the streets in peaceful protests in Chicago, Los Angeles, New York City, and Washington, D.C. By 3 a.m. more than 100,000 people signed an online petition urging the Justice Department to pursue civil rights violation charges against George Zimmerman.

The outrage over the killing of an unarmed Black teenager who was doing nothing wrong must continue until some semblance of justice is achieved. People who want to keep faith in American justice feel uncomfortable, upset and disheartened. Where is the justice if walking while Black is enough to get you “stopped and frisked” in New York City and fatally shot in Florida with its senseless violent “Stand Your Ground” law that allows people to defend themselves with deadly force anytime and anywhere they imagine they are or say they feel threatened even if they are the stalker?

Many decades of struggle and progress to eliminate racial profiling, arbitrary arrests, unfair sentencing, imprisonment and criminalization of Black males at younger and younger ages are being reversed by determined special interests like the gun lobby putting profits before the most basic American civil rights. The National Rifle Association and their allies’, including the American Legislative Exchange Council (ALEC), determined efforts to support and pass “Stand Your Ground” and other destructive laws to protect guns rather than children perpetuates the epidemic of gun violence, especially for Black male teenagers like Trayvon Martin.

What made a Black male teenager in a hoodie walking home in the rain appear suspicious and “up to no good” in George Zimmerman’s eyes? Would he have stopped a White male teenager? Isn’t it long past time that we have a candid conversation about how we can create a post-racial America for our children and grandchildren beginning today?