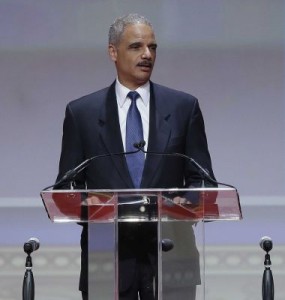 There seems to be no argument between the juror who spoke to CNN and what Attorney General Eric Holder is saying about the killing of Trayvon Martin.

The Attorney General has said that the killing was a “tragic, unnecessary shooting” Monday. He also said the Justice Department will follow “the facts and the law” as it reviews evidence to see whether federal criminal charges are warranted.

Meanwhile, a juror spoken to by CNN’s Anderson Cooper (see below) said that the actions of Zimmerman were such that he did not break the law, but made some bad decisions.

The woman known as Juror B37 told CNN’s Anderson Cooper that Zimmerman made some poor decisions leading up to the shooting, but that Martin wasn’t innocent either.

“I think both were responsible for the situation they had gotten themselves into,” said the juror, who is planning to write a book about the trial. “I think they both could have walked away.”

In his first comments since Zimmerman’s acquittal Saturday, Holden said the 17-year-old’s death provides an opportunity for the nation to speak honestly about emotionally charged issues. He said the nation must not forgo an opportunity to better understand one another.

The attorney general’s characterization of the killing drew strong applause from the audience at the 51st national convention of Delta Sigma Theta, the nation’s largest African-American sorority. Holder’s comments came on the same day that a delegation of New York City House members said they will push hard to see that the Justice Department pursues federal charges against Zimmerman.

“Trayvon Martin did not have a gun, a knife or weapon. All he had was a package of Skittles that set into motion the events that led him to be shot dead in cold blood,” said Rep. Hakeem Jeffries (D-Brooklyn), at a news conference with other House members in front of the federal courthouse in Manhattan.

Rep. Jerrold Nadler (D-Manhattan), the ranking member on the House judiciary subcommittee on the Constitution and civil justice, told those at the news conference that Zimmerman saw Martin as a threat “and that was being black and walking in the wrong neighborhood. The state of Florida failed to serve justice.”

On Sunday, the Justice Department said it is reviewing evidence in the case to determine whether criminal civil rights charges would be brought.