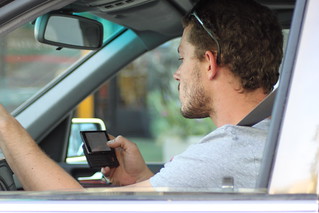 Individuals in a majority of American states currently live under laws that restrict texting while driving, but not all states have enacted such laws. As of October 1, 2013, however, Florida added its name to the growing list of states that outlaw the practice by all drivers. This new law will have various effects on the state, so all those within it should fully understand the ban. As is the case in most instances, ignorance of the law is not a defense for breaking it.

As mentioned, the new texting while driving ban went into effect in Florida on October 1, 2013, and it is already having an effect on those driving around in the state. It should be noted that the law still allows individuals to text while stopped in traffic, such as at red lights, but people will be handed down $30 fines if they’re ticketed for this. Unfortunately, texting while driving is considered a secondary offense, and this means that an officer must pull a person over for another violation before ticketing a driver for this offense.

This ban comes after the discovery that there were about 4,841 auto accidents in Florida in 2012 related to phone use while driving, but the new law doesn’t cover cell phone use other than texting. Those who passed the law, however, are hoping that it will work as more of a deterrent than anything else. It should be noted that drivers ticketed for the violation may see increased insurance rates, and after a second ticket, three points will be accessed to their license. These points can eventually lead to a license suspension.

Justification Behind the Ban

Most people understand the necessity and justification behind banning the act of texting while driving, but few realize the actual consequences of the behavior. Nearly one in five accidents in 2010 that led to injury were directly attributable to distracted driving. The dangers of texting while driving become apparent when it’s realized that this accounts for about one out of every five of these distracted driving incidents.

Studies have shown that quickly answering a text can take a person’s eyes off the road for a full five seconds. At highway speeds, this equates to crossing the length of a football field without looking where one is going. If this isn’t justification enough for the law, then nothing likely is.

Consequences of Such Accidents

Texting while driving can lead to serious injuries or even deaths. In fact, it was recently discovered that texting while driving now leads to more auto deaths in teens than drinking and driving. In fact, a person who is texting could easily merge into oncoming traffic, and sadly, head-on collisions such as these account for 10 percent of all vehicular deaths even though they only account for about of two percent of total accidents.

A person who is injured due to another person’s negligent driving behavior, such as texting or cell phone use, should seek out a personal injury attorney immediately. One Orlando accident attorneys group states that a “personal injury attorney can represent you in any situation where you have been hurt due to the negligence or wrongdoing of another individual, a company, or even a government employee or agency.”

Though most areas have bans on this, these laws do vary by state. An attorney will know a locale’s specific laws and what’s necessary to prove negligence in the accident. This often leads to accident victims recovering damages for the incident, and this is imperative due to the financial implications that follow such an accident.

As can be seen from looking at the statistics, texting while driving is a dangerous behavior. It’s only sad that Florida took so long to recognize the danger for what it was and make laws controlling it. Unfortunately, many individuals will see the penalties for the crime as minor, and this will likely lead them to not change their ways. That makes it important for an individual who’s involved in an accident due to such negligent driving behavior to know their rights and seek out legal help immediately.

Legal writer Lisa Coleman shares the latest updates of Florida’s new texting law and the penalties that can accompany it. Statistics show that more accidents that ever are happening in today’s world due to electronical gadgets, such as cell phones, in use by drivers behind the wheel of a car.

She recently researched online how the Steinger, Iscoe & Greene, an Orlando accident attorneys group, can represent and counsel a client who has been a victim in a car accident due to another party’s negligent and distracted driving behaviors.