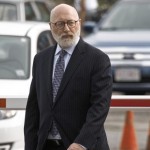 James “Whitey” Bulger may be one, tough dude, but his lawyer J W Carney is not exactly a slouch in the tough lawyer stakes.

Carney became famous defending people who did horrible things – like the developer who paid a hit man to run over his wife, or the man who killed his wife with an axe after cutting his kids’ throats.  Or the man who killed two people and injured others during a shooting rampage.

As the WSJ says:

Though these clients were convicted, the cases boosted Mr. Carney’s prominence in Boston legal circles. His challenge now is defending alleged gangster James “Whitey” Bulger against 19 murder charges, among others. The case’s twists, including revelations that Mr. Bulger was an alleged informant for the Federal Bureau of Investigation and protected by a rogue agent, have captivated New England and embarrassed law-enforcement officials for decades.