How many lawyers want to tell their bosses to piss off and move direction from the corporate to the carefree, cartooning life of someone who illustrated her “departure memo” that explained her path from corporate law to her new gig making art.


As AdWeek reported, this is all a new spin on the now-familiar practice of colorful professional sign-offs. (The soon-to-be baker’s cake resignation letter was pretty sweet, as were Marina Shifrin’s viral quitting dance and that Montana agency employee’s F-bomb Facebook post.) But Catherine’s illustrative missive stands out for how joyfully it throws an extra dose of shade on the frustrations of what she describes as a grueling white-collar job.

She deserves extra credit for her nuanced perspective on those of her former colleagues who are enthusiastic about law, especially when she makes calling them “cyborgs” sound almost, but not quite, like a compliment. (“The world needs cyborgs!”)

It’s also, obviously, a clever way to announce her availability—and demonstrate her chops—to a new job market. Commenters at legal industry trade blog Above the Law are already suggesting that site hire her, but something tells us she might not be interested.

She does preface her story by saying it includes some flat-out exaggerations, though. So, advertising is probably the perfect field for her.

It’s all a long way from corporate law, but that’s the way it rolls sometimes.


nota bene, because we live in that kind of world: (a) While everything here has a basis in truth, I have reworded some conversations, summarized, and flat-out exaggerated in some places. (b) Please, please, PLEASE, for the love of all that is good and holy, read the last few paragraphs carefully and don’t take anything here out of context. Thank you.

When I initially started here, way back in 2010, we started one day with an icebreaker whereby we underlings had to say what we’d be doing with our lives if we hadn’t stumbled into law. I didn’t want to seem presumptuous, so I weighed my options and chose the second-best version of what I was really thinking, perhaps in an attempt to seem like I had an iota of commercial savvy.

Like many of my friends and classmates and colleagues, I had gone to law school fairly aimlessly in my mid-20s with no real plan other than the well-beaten path: do appreciably (if not well), Biglaw, pay off loans, then see where the cards fell.

I did appreciably. Truth be told, my crowning achievement of law school was painting a spot-on replica of one of the law school’s more memorable paintings, which was waved as a flag, Les Misérables-style, at the close of the first act of the law school musical my 2L year.

At that point, I was in the second year of a distance relationship with my fiancé – also a lawyer, and one living approximately 2500 miles away from me – which left me kind of a shell of a person. I loved New York, but I was largely running on adrenaline, caffeine, and sugar, and underneath, all I really was was this belief that if only, if only we could live in the same city, life would be glorious. I left.

And it was, for a little while.

Malaise crept in. I was living in a great and iconic city, working with incredibly smart and fun people, not needing to fly six hours each way every third weekend to see my fiancé for forty-eight and then coming back on a red-eye, commuting on the cable car, and attending the annual Hunky Jesus contest in Dolores Park. You’d think I’d have been at least somewhat content with my newfound paradise.

Somewhere I got in my head the idea that the problem was my not being in New York. Calls were made. Shit happened. I came back — to the city, the firm — and was ready to finally LIVE.

People here are really talented. Unfortunately, for many people, the talents from our past lives now merely take the form of shit we hang on our walls. It’s the “used to” syndrome.

I’ve always made art. When I create things, time simply stops. Nothing else makes me so happy, so alive, so happy to be alive. It’s transcendental. It’s what life should be. Things took off when I started renting studio space, and I saw no need to hide this side of me when I came back to New York. Not gonna lie, the universal reaction shook me a little.

Naively undeterred by all of this, I endeavored to make painting my “life” outside of work. You can guess how that went.

See, e.g., that month where I spent, total, about half an hour in my studio:

See, e.g., that month where I spent, total, about half an hour in my studio:

From time to time I’d be really excited about some project at work, but usually my ideas of the best and highest use of my talents were different from my superiors’, and I was quickly put in my place.

And, to top it off, my aspirational dedication to painting was noticed, but not in a good way. 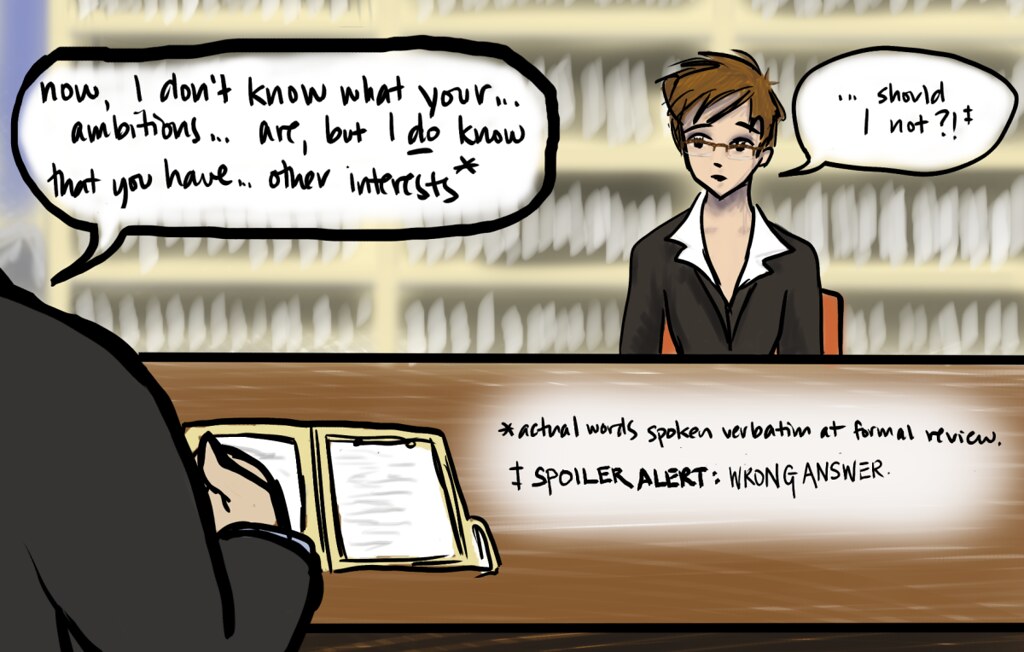 THE FIVE STAGES OF GRIEFREBELLION!

It started with some [mostly] socially acceptable edginess

then pushing that envelope

…abiding by the dress code, if only due to technicalities

pushing other envelopes, just because I could (though really, I only pocketed the other ones) 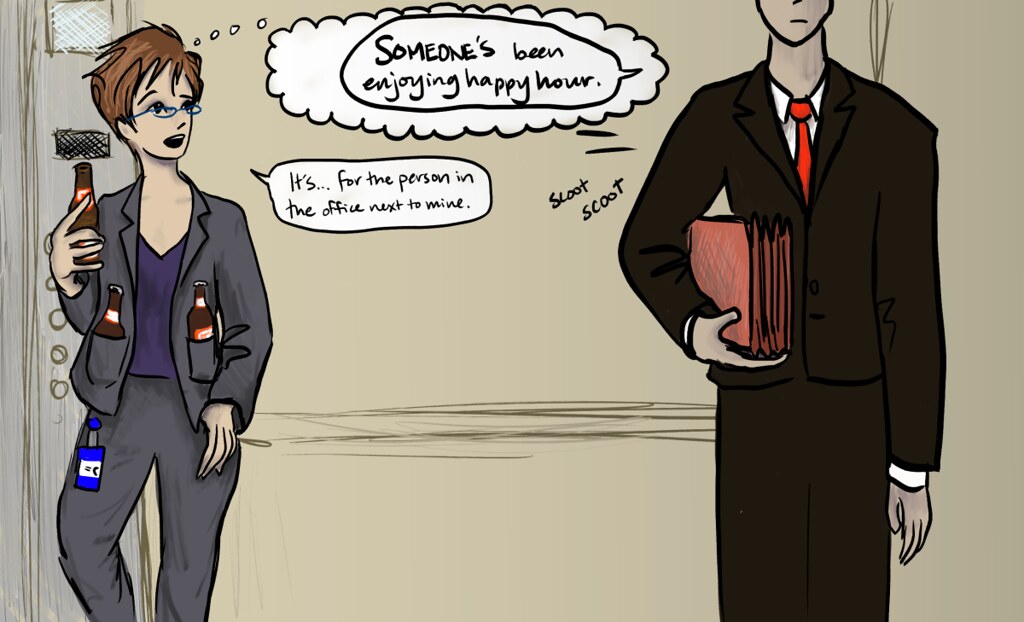 and perhaps the gravest rebellion of all, Oxford commas. 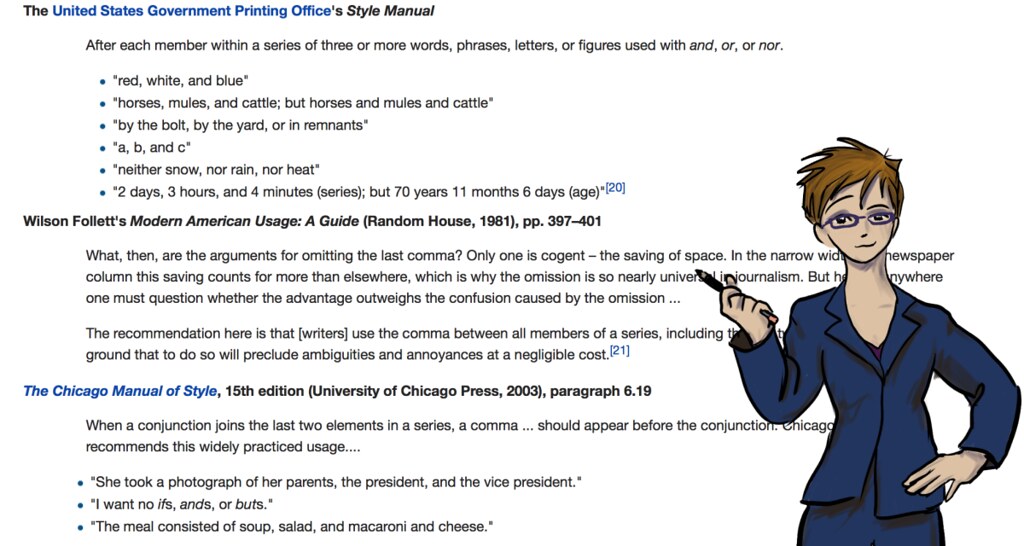 AVOIDANCE, WITH AN EXCUSE! 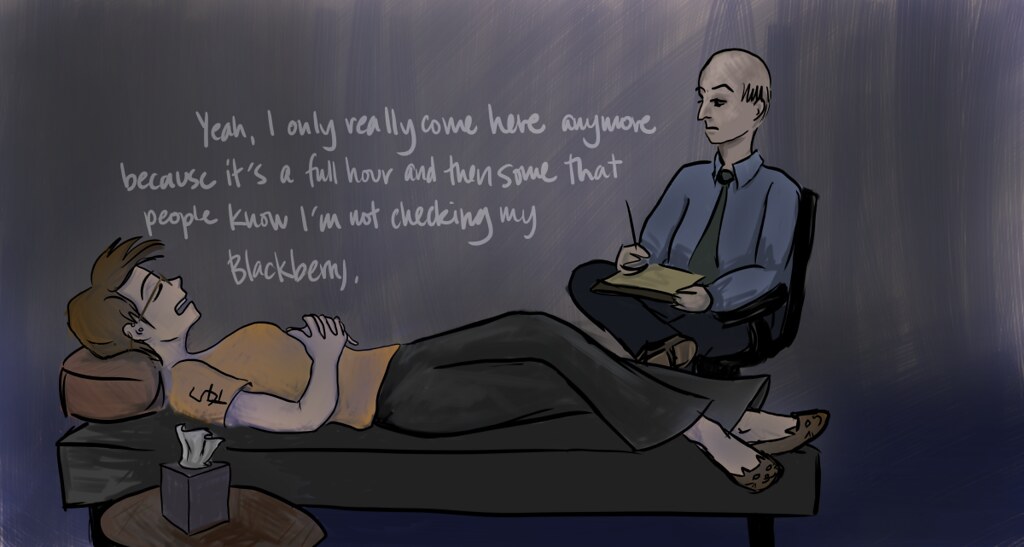 SUBVERSION! (if only enjoyed by me) 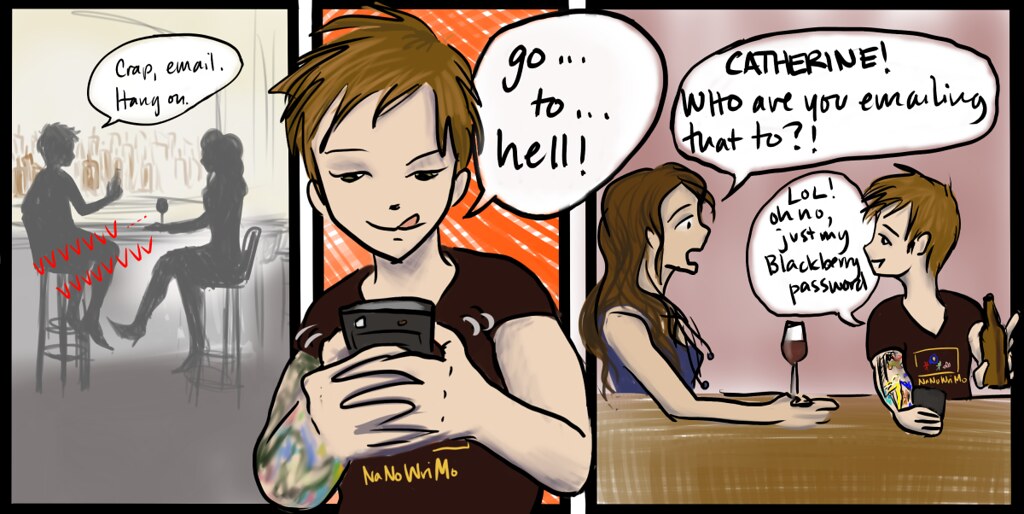 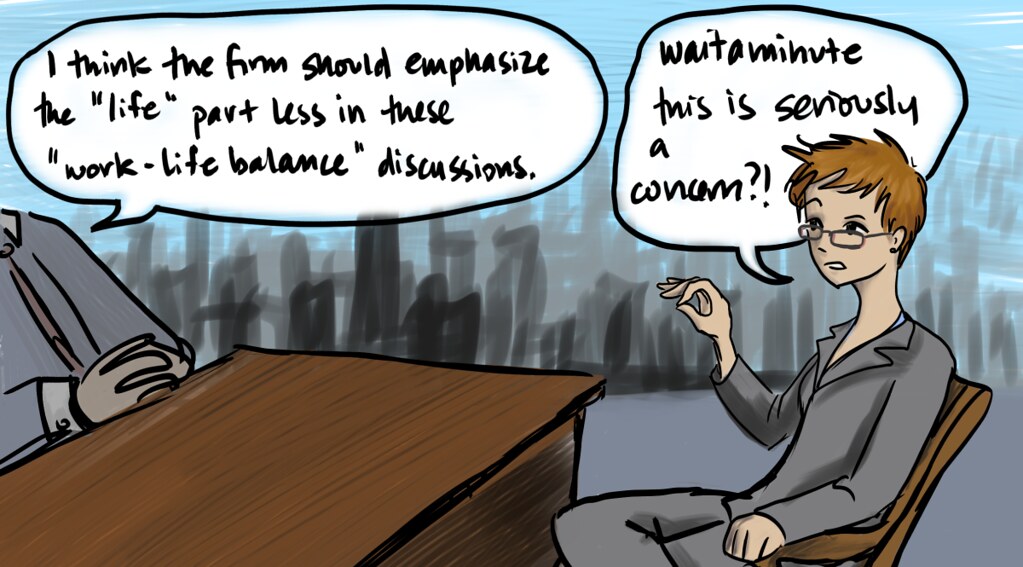 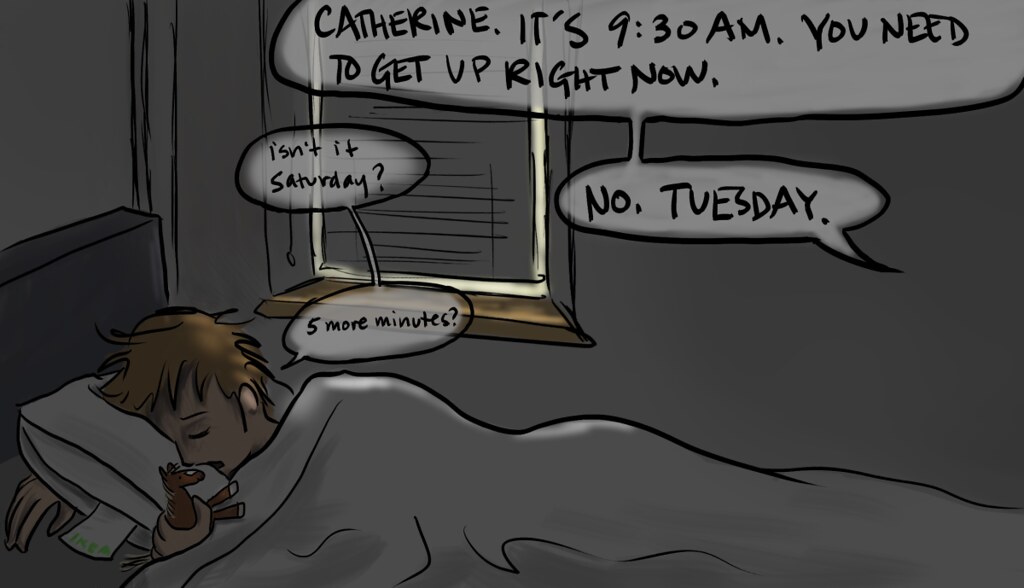 After an exceptionally long period in which I felt just about everything art-related (or anything-related) was mocking me on a personal level, I said to myself one day, look, you can make awesome stuff happen yourself, all this shit notwithstanding. And so I signed up for a Thursday evening painting class. I was so thrilled to show up to the office that morning before 10 AM so that I could skip out early with impunity. 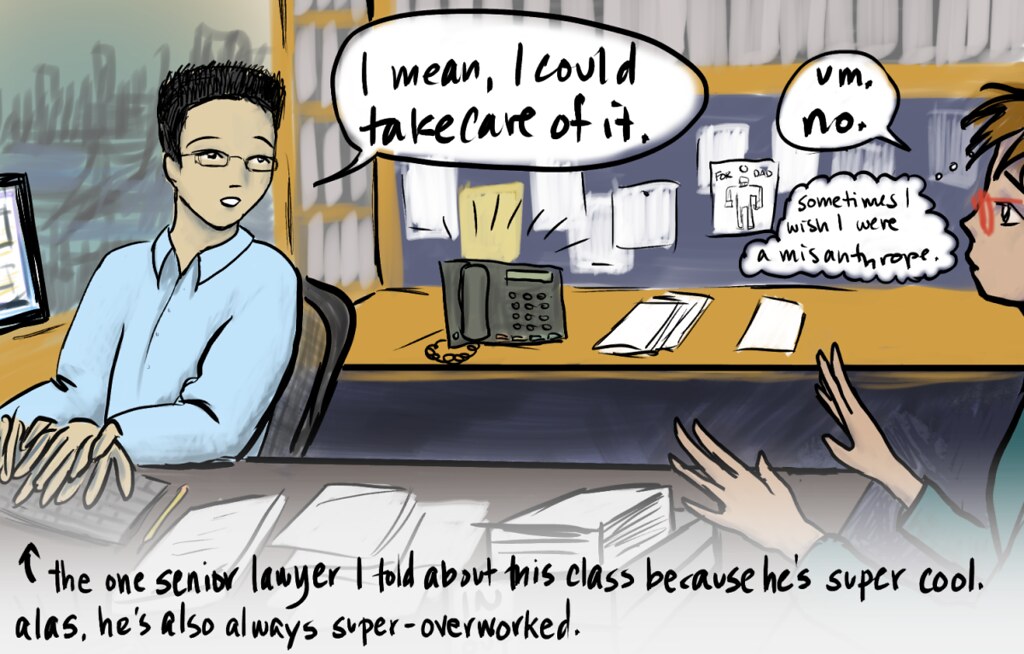 Never fear! There was always next week.

Or… the week after?

It came as a complete surprise when someone else suggested to me that I had an out. 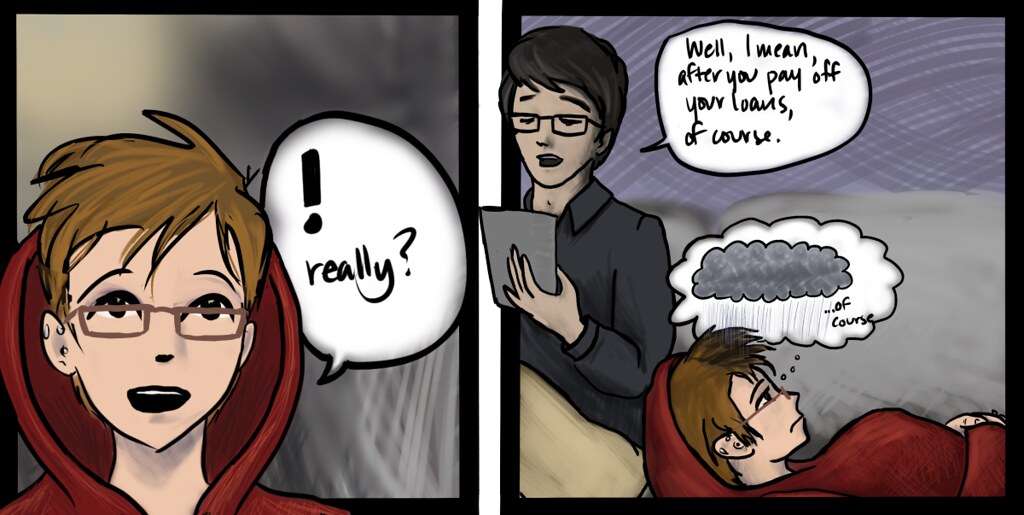 It took a while for my parents to warm to the idea. 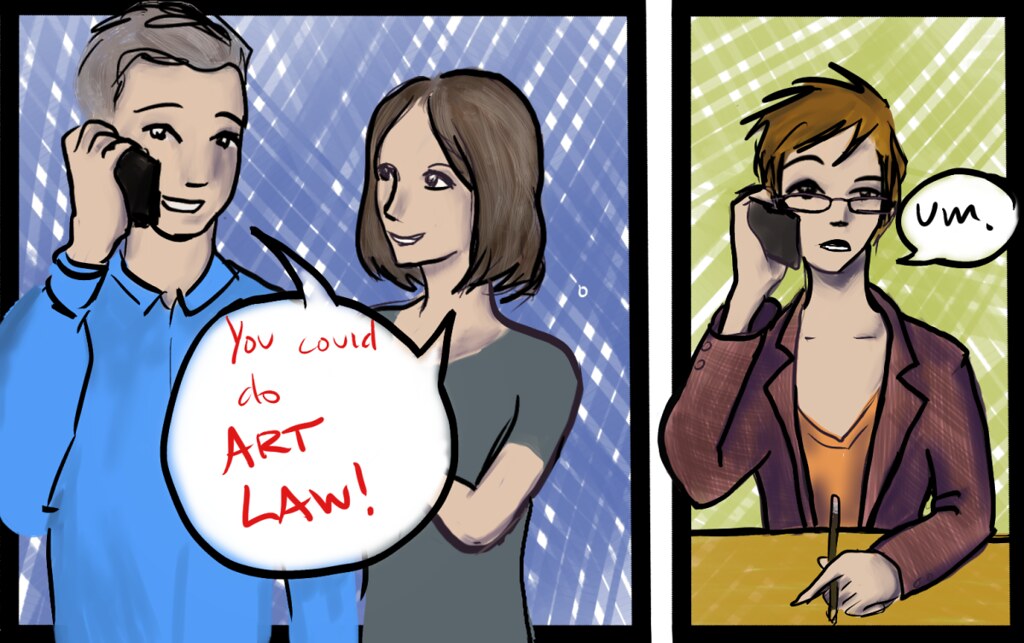 Well. Decisions were made. Shit happened.

And so I kept it mostly together (for months, mind you), deciding to make light of my temporary predicament… 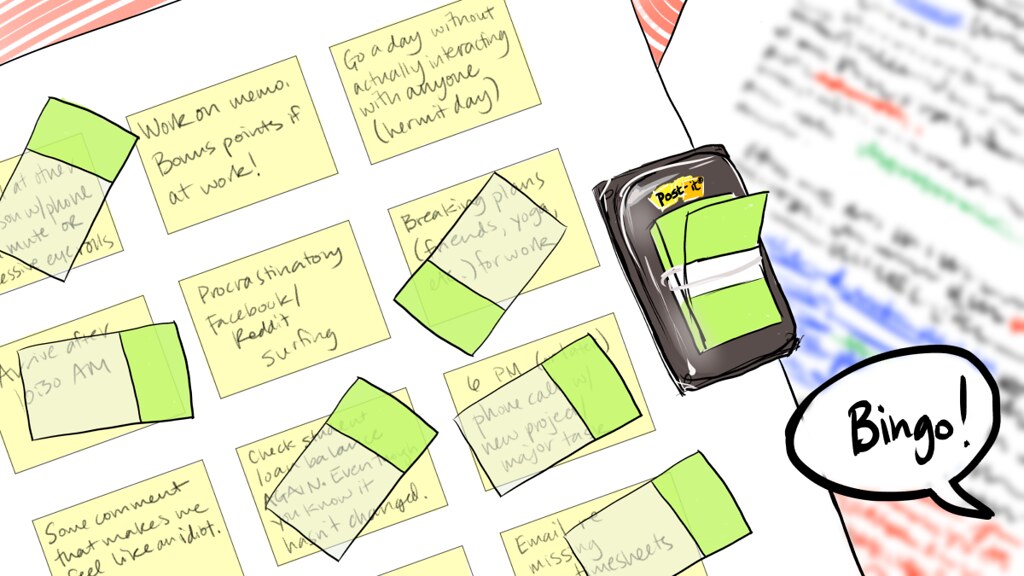 …though conversations with the powers-that-be about my place at the firm got awkward, to say the least.

Well, there’s always been a light on the horizon, and it’s finally here.

It goes without saying that if you have to practice law, this is a great place to do it. You all are a group of incredibly bright and talented people, and I’m grateful for the friendships I’ve made, the things I’ve learned, the always kind, personable, appreciative clients, the pride I’ve felt when telling people where I work. As I’ve told countless recruits over coffee or lunch: Working at any big law firm, especially in New York, and especially one of this caliber, will require great sacrifices, and if this is what you’re set on doing, you may as well do it with the best.

But the moral of my story is that this lawyering life requires sacrifices I’m not willing to make. This job threatened to make my artwork into a “used to.” I viscerally and vehemently reject that. Through trial and error and six figures of student loans, I’ve learned that there are two types of things in this world: things that nourish me and things that drain me. And things that get in the way of my art are excess noise. They’re superfluous. Clutter. 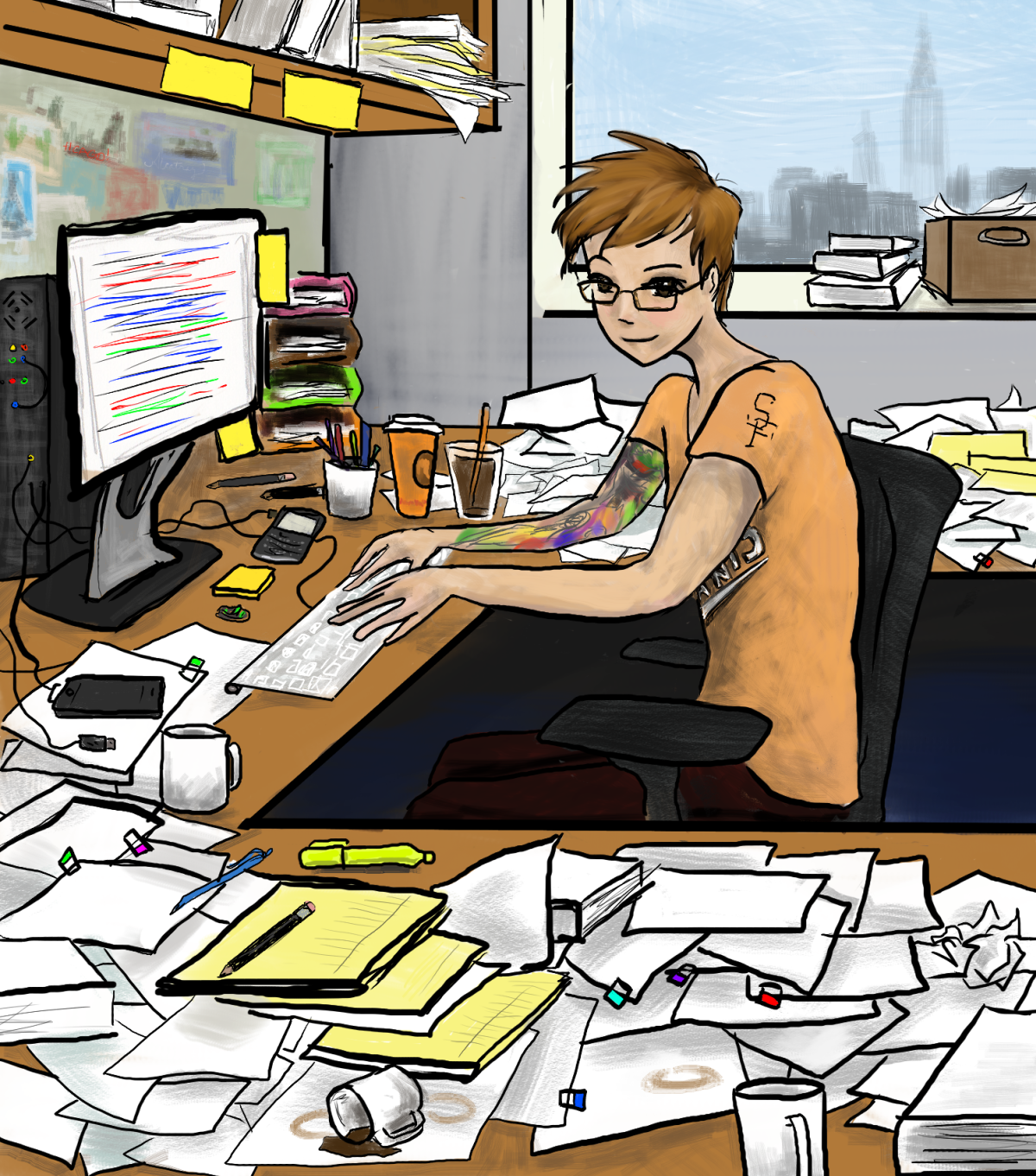 For those of you who do find time for things you love: Awesome. Don’t give it up.

For those of you who have found your calling doing this law thing and don’t miss any bits of your past lives, you have my combined admiration, revulsion, and pure curiosity as to how the hell you keep on keeping on—my bets are on you being cyborgs. And that’s good! The world needs cyborgs.

For the rest of you, I’d just encourage you to try to find some time, however much you need—whether that’s a half hour a week, or a whole reboot of your life—to enjoy the things you used to.