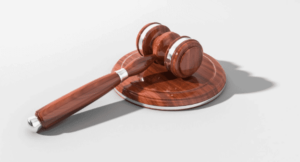 Do New Zealand Crown Prosecutors have a more “assertive” role in sentencing that comparable jurisdictions like Australia and England?

According to research undertaken by Wellington Crown Prosecutors Luke Cunningham and Clere, they probably do.

Andrew Britton (left) completing post-graduate degrees at both Oxford and Cambridge universities and worked as a prosecutor in New Plymouth and Whanganui before moving to Wellington.

The research relies on data obtained and analysed from interviews undertaken with a non-representative sample of ten Crown Prosecutors from around New Zealand between 2015 and 2016.

Of the sample, six participants were female and four were male with career durations ranged from 10 months to 37 years.

Prosecutors are among the most powerful actors in any criminal
justice system. Their exercise of discretion, however, has not been subjected to the
same level of public and empirical scrutiny as other parts of the criminal justice
system. To deepen understanding, I empirically explore for the first time the form,
function and limits of the New Zealand Crown Prosecutor’s role at the sentencing
stage of the criminal justice process.

Semi-structured interviews of a non-representative
sample of ten Crown Prosecutors are analysed using Hawkins’ framework of
‘‘surround’’, ‘‘field’’ and ‘‘frame’’. Findings suggest that whilst New Zealand’s regime
shares history, principles, and structural features with English and Australian regimes,
it goes further to permit Crown Prosecutors a more assertive role in sentencing.
In the surround’, populist and managerial pressures create frustration,
strain, and concern. Changes to funding models suggest the potential for unjust
sentencing outcomes has increased. The ‘‘surround’’ also intrudes upon and transforms
decision-making ‘‘frames’’.

The opinions and presence of stakeholders influences
decisions and practices at office and individual levels. Justice may be reactive,
forward-looking, or negotiated depending on the particular mix of individuals involved
– something accentuated by the regime’s privatised and decentralised form.

Findings also suggest that Crown Prosecutors ‘‘frame’’ their role in occupational
terms. The lack of interest of universities, professional bodies, and law and policymakers
in offering or requiring prosecutorial training before entry to the role is
influential. This renders decision-making more susceptible to pressures in the ‘‘surround’’
and ‘‘field’’, and increases variation in decision-making ‘‘frames