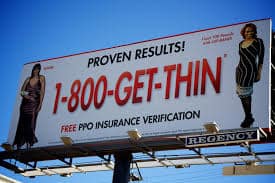 Julian Omidi, 49, of West Hollywood, and Mirali Zarrabi, 55, of Beverly Hills, were arrested pursuant to a federal indictment that alleges a host of criminal charges stemming from GET THIN’s Lap-Band (or bariatric) surgery and sleep study programs between May 2010 and March 2016.

Omidi, a physician whose license was revoked in 2009, controlled, in part, the GET THIN network of entities, including SCM and IMS, that focused on the promotion and performance of elective, Lap-Band weight-loss surgeries. Omidi established procedures requiring prospective Lap-Band patients – even those covered by insurance plans he knew would never cover Lap-Band surgery – to have at least one sleep study, and employees were incentivized with commissions to make sure the studies occurred, according to the indictment. The purpose of the sleep studies was to find a second reason – a “co-morbidity,” such as sleep apnea – that GET THIN would use to convince the patient’s insurance company to pre-approve the Lap-Band procedure.

After patients underwent sleep studies – often with little indication that any doctor had ever determined the study was medically necessary – GET THIN employees, acting at Omidi’s direction, allegedly often falsified the results to reflect that the patient had moderate or severe sleep apnea, and that they suffered from severe daytime sleepiness. Omidi then caused those falsified sleep study reports to be used in support of GET THIN’s pre-authorization requests for Lap-Band surgery.

Relying on the false sleep studies – as well as other false information, including patients’ heights and weights – insurance companies authorized payment for some of the proposed Lap-Band surgeries. The indictment alleges that GET THIN received at least $38 million for the Lap-Band procedures.

Even if the insurance company did not authorize the surgery, GET THIN still was able to submit bills for approximately $15,000 for each sleep study, receiving millions of dollars in payments for these claims, according to the indictment. The insurance payments were deposited into bank accounts associated with the GET THIN entities.

“The scheme outlined in the indictment focuses on bogus sleep studies that the defendants utilized to engage in a much more lucrative fraud involving Lap-Band procedures,” said Acting United States Attorney Sandra R. Brown. “Patients were harmed as a result of this fraud scheme when they were subjected to unnecessary medical procedures, and insurance providers were harmed when they paid out tens of millions of dollars after receiving fraudulent bills.”

Zarrabi allowed his electronic signature to be used by GET THIN to make it falsely appear that he had reviewed and interpreted the falsified sleep studies, even though he knew the reports were being altered, according to the indictment. Zarrabi also allegedly demanded to be paid for the use of his electronic signature on hundreds of prescriptions for devices to treat sleep apnea. Zarrabi allegedly did not review the prescriptions, which were sent with the falsified sleep study reports to durable medical equipment providers that billed for sleep apnea equipment that patients often did not need.

“While the defendants in this case were scheming victims who had hopes of ‘getting thin,’ they were also busy getting rich by defrauding the insurance companies and exploiting unwitting victims in many cases,” said Paul Delacourt, the Assistant Director in Charge of the FBI’s Los Angeles Field Office. “The FBI and its law enforcement partners worked collaboratively to reach this successful result and will continue to hold the perpetrators of health care fraud accountable.”

“The FDA takes seriously its responsibility to protect patients by requiring truthful, non-misleading, and accurate information in the labeling of FDA-regulated products, such as medical devices,” said Lisa L. Malinowski, Special Agent in Charge, FDA Office of Criminal Investigations’ Los Angeles Field Office. “Patients, who may be influenced by false or misleading information, need to be fully aware of the risks of any surgical procedure.”

“Doctor Zarrabi and former physician Omidi victimized countless patients when they allegedly provided medically unnecessary treatment in order to boost their own profits to the tune of tens of millions of dollars,” said California Insurance Commissioner Dave Jones. “Medical provider fraud is multi-billion dollar problem that drives up health insurance premiums and creates a drain on our economy.”

In 2014, the government seized more than $110 million in funds and securities from accounts held by individuals and entities involved in the criminal scheme described in the indictment, including Omidi. The government is seeking forfeiture of some or all of those funds in the criminal case, and also intends to pursue civil forfeiture of some or all of the assets.

“Driven by greed, Omidi and Zarrabi allegedly sought to cheat their way to riches by bilking millions of dollars from Tricare and other health care providers,” stated R. Damon Rowe, Special Agent in Charge for IRS Criminal Investigation. “Those who betray patients and commit health care fraud steal from taxpayers‎ and insurance providers, while corrupting the integrity of our nation’s health care system. IRS Criminal Investigation and our law enforcement partners will investigate and criminally prosecute such fraud schemes to the fullest extent of the law.”

Omidi and Zarrabi, along with the corporate defendants, are scheduled to be arraigned on the indictment this afternoon in United States District Court.

If they were to be convicted in this case, Omidi and Zarrabi potentially would face decades in federal prison, including a statutory maximum penalty of 20 years in prison for each of the 31 mail fraud and wire fraud counts alleged in the indictment.

The GET THIN case is being prosecuted by Assistant United States Attorneys Kristen A. Williams and Cathy J. Ostiller of the Major Frauds Section.