You are here: Home / Law Jobs / Law School Rankings – Above the Law’s Take 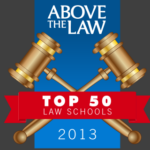 AbovetheLaw is not used to towing the line when it comes to conventional law reportage, which is not a bad thing.  Nor are the blog’s law school rankings, which looks at prioritizing outcomes in terms of the prestige (and pay packet) of any law job before deciding which law school to attend or – indeed – whether to attend any at all.

Why would we limit the list to only 50 schools? Well, there are only a certain number of schools whose graduates are realistically in the running for the best jobs and clerkships. Only a certain number of schools are even arguably “national” schools. Though there is bound to be something arbitrary about any designated cutoff, we had to make a judgment call. In any event, the fact that one law school is #98 and another is #113—in any rankings system—is not a useful piece of consumer information.

The basic premise underlying the ATL approach to ranking schools: the economics of the legal job market are so out of balance that it is proper to consider some legal jobs as more equal than others. In other words, a position as an associate with a large firm is a “better” employment outcome than becoming a temp doc reviewer or even an associate with a small local firm. That might seem crassly elitist, but then again only the Biglaw associate has a plausible prospect of paying off his student loans.

In addition to placing a higher premium on “quality” (i.e., lucrative) job outcomes, we also acknowledge that “prestige” plays an out-sized role in the legal profession. We can all agree that Supreme Court clerkships and federal judgeships are among the most “prestigious” gigs to be had. Our methodology rewards schools for producing both.

Now more than ever, potential law students should prioritize their future job prospects over all other factors in deciding whether to attend law school. So the relative quality of law schools is best viewed through the prism of how they deliver on the promise of gainful legal employment. The bottom line is that we have a terrible legal job market. Of the 60,000 legal sector jobs lost in 2008-9, only 10,000 have come back. So the industry is down 50,000 jobs and there is no reason to believe they will ever reappear. If you ignore school-funded positions (5% of the total number of jobs), this market is worse than its previous low point of 1993-4. The time has come for a law school ranking that relies on nothing but employment outcomes.