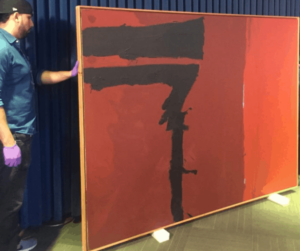 The Untitled Work, Created in 1967, was Missing for 40 Years

Geoffrey S. Berman, the United States Attorney for the Southern District of New York, and William F. Sweeny Jr., the Assistant Director-in-Charge of the New York Field Office of the Federal Bureau of Investigation (“FBI”), announced today the return of a stolen painting, Untitled, created in 1967 by Robert Motherwell.

Manhattan U.S. Attorney Geoffrey Berman said: “The storied past of this magnificent piece may never be known. But now, thankfully, 40 years after Robert Motherwell began painting this piece, this work of art is where it should be: with the Dedalus Foundation and for the benefit of the public.”

FBI Assistant Director-in-Charge William F. Sweeny Jr. said: “Robert Motherwell was an influential and iconic artist of his time. His love of the abstract inspired him to create works enjoyed by many still today. Unfortunately, several of his paintings went missing about four decades ago – the 1967 Untitled piece is but one of them. Motherwell never titled this work of art before it vanished. Maybe, after all, that’s part of its story – one that begins a new chapter here today. We are honored to restore this extraordinary piece to the Dedalus Foundation, so that those who appreciate the value of fine art may now come to know the true narrative of the painting’s past, present, and future.”

Robert Motherwell, a 20th century American painter, printmaker, and editor, was among a group of visual artists – including Willem de Kooning, Jackson Pollock, and Mark Rothko – often considered together as the “New York School.” Throughout much of the 1960s and 1970s, Motherwell exclusively employed the Santini Moving Company (“Santini”) to transport and store his artwork. In or around 1978, Motherwell changed storage companies, and in the process of preparing and itemizing his artwork for the move, identified dozens of paintings, including Unitled, as missing or stolen.

Following Motherwell’s death in 1991, virtually all of his paintings were deeded to the Dedalus Foundation (“Dedalus”). In 2017, the son of a former and now deceased Santini worker contacted the Dedalus Foundation regarding the authenticity of Untitled, which had been in his father’s possession for the past 30 years. After being contacted by Dedalus, the FBI approached that individual, who voluntarily relinquished Untitled to a special agent assigned to the FBI’s Art Crime Team. The U.S. Attorney’s Office and the FBI are now returning the painting to its rightful owners.

Perry Amsellem, partner at Pryor Cashman LLP and counsel to Dedalus said:  “I am genuinely honored to be able to assist the Dedalus Foundation in recovering this lost Motherwell piece. This feat would not have been possible without the help of the FBI and the Courts, with whom I closely worked to secure the necessary evidence to seize and repossess Untitled.”

Mr. Berman thanked the FBI’s Art Crime Team and the Dedalus Foundation for their assistance.

The case is being handled by the Office’s Money Laundering and Asset Forfeiture Unit. Assistant U.S. Attorney Jonathan E. Rebold is in charge of the case.