The AmLaw rankings also show that the US-based firms that are counted in the survey indicate the mergers or tie-ups indicate things are looking distinctly rocky for the firms. 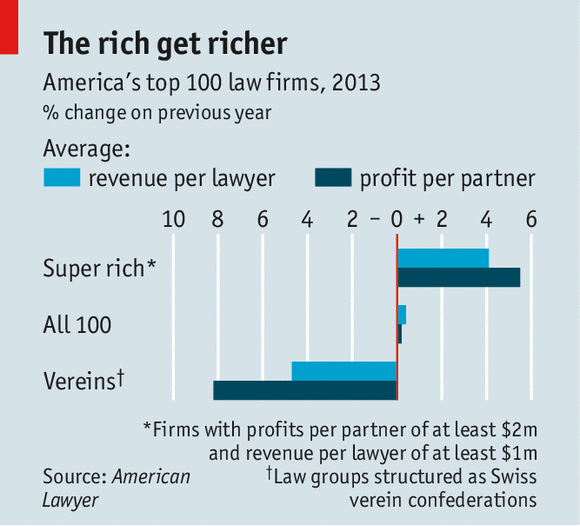 The Economist covered the AmLaw rankings and reported that the  April 28th report the highlighted the disappointing performance in 2013 of a group of firms it called the “six giant alternatives” (see chart).

All but one are in America’s top 15 by revenue, and were created through mergers during the past decade.  Last year their combined profits per partner (PPP) fell by 8.2%. The remaining 94 firms among the country’s 100 biggest enjoyed a 2.7% rise in this measure.

The vereins protest that the headline numbers are unfair. Four of the six actually increased their PPP in 2013; the other two, Norton Rose Fulbright and Dentons, were born just last year in mergers between highly profitable American operations and foreign firms that were far less lucrative, and which therefore dragged down the combined average.

Peter Martyr, the head of Norton Rose Fulbright, says that each of its constituent parts performed better in 2013 than 2012. Nonetheless, the figures do show that the big advantages hoped for when these global alliances were formed have yet to materialise.