Conflict of interest issues and lawyer/client relationships are one thing, but when a prisoner is found with a bikini-clad image of his favorite prosecutor on his cell wall it has lead to all sorts of trouble, including the loss of the prosecutor’s $83,000 a year job. 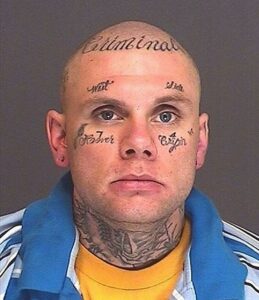 The picture of Marriya Wright has lead to an investigation of prison inmate Matthew Baumrucker, (pictured) who she also texted 1200 times in a little over a month, and whether she had assisted him to avoid being taken into custody on a felony drug charge when he was still at large.

At issue is a period in March when police were reportedly investigating an assault case and trying to serve the warrant in the drug case. A warrant says a witness told police that Baumrucker had spoken with a woman named Marriya in a car at a gas station. The witness said she overheard Marriya tell Baumrucker that he “needed to get his warrant taken care of.” Police said they later obtained surveillance footage showing that Baumrucker had entered Wright’s vehicle at that gas station. She allegedly did not turn him in.

After he was taken into custody, Wright repeatedly met with Baumrucker in March and April in a jail area intended for attorney-client visits, although she never represented him, the articles say. Guards reported that Baumrucker, whose forehead bears a tattoo reading “criminal,” had a photo of Wright wearing a bikini in his cell. Wright has competed in bodybuilding contests; it is unclear from the underlying reports whether the photo was from one of her competitions.

The defense attorney described Wright as a good person, but her intentions got out of hand and “overlooked what a lot of people think are some damning things, which are the tattoos on this person’s face,” Bugbee said

A lawyer for Wright, 34, said she could have exercised better judgment but intended to help Baumrucker straighten out his life. She had been on paid leave from the Spokane County prosecutor’s office since April.