You are here: Home / Briefs / Briefings / Bitcoin & Other Top Crytocurrency Stories from 2017

After lingering on the periphery of financial markets for the past several years, cryptocurrency has finally started to move into the mainstream.

While the explosion in Bitcoin’s value dominated the news headlines, cryptocurrency in 2017 was filled with worthy topics of discussion. For the purposes of this article, we narrowed it down to what we see as the top three cryptocurrency-related stories of 2017. 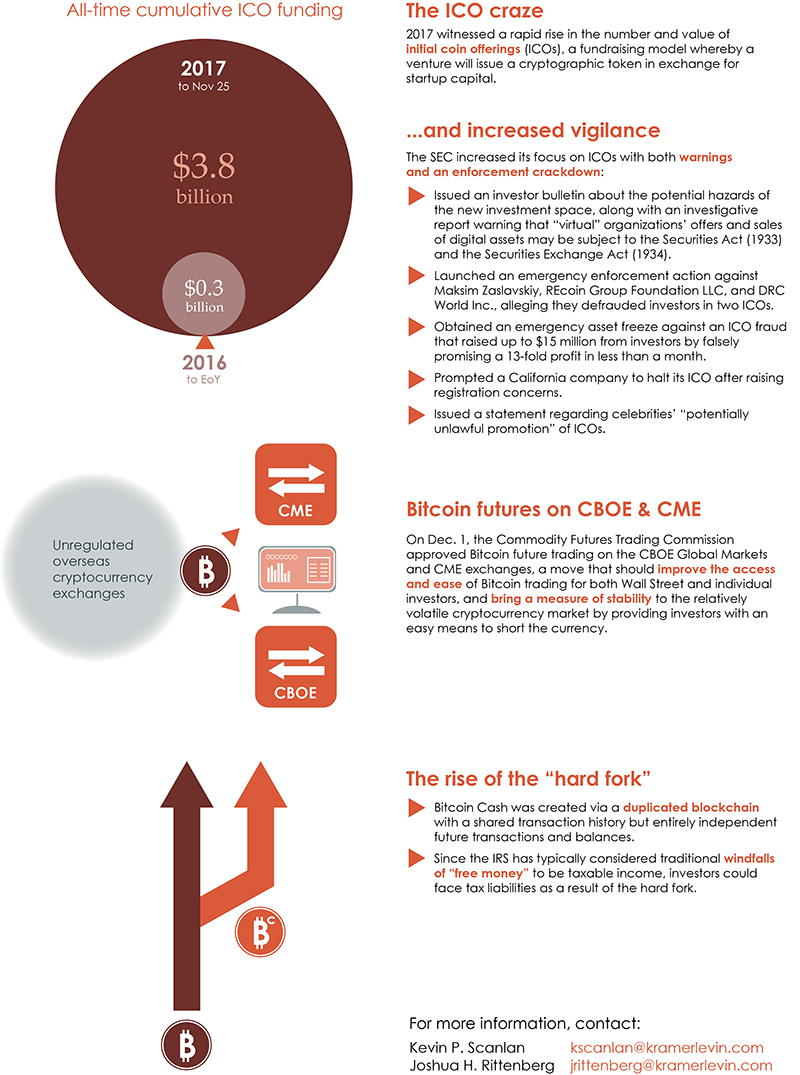 In the past 12 months, markets witnessed a rapid rise in the number and value of initial coin offerings (ICOs), a fundraising model whereby a venture will issue a cryptographic token in exchange for startup capital.

The nature and use of these tokens varies greatly from project to project. ICOs rapidly went from being an infrequent niche offering to a common occurrence that in some cases attracted more than $100 million.

Hundreds of ICO-backed projects were launched, and all-time cumulative ICO funding surged from $295.45 million at the end of 2016 to $3.77 billion as of Nov. 25, according to CoinDesk data.

The increased popularity of ICOs inevitably brought increased scrutiny and regulatory attention. On July 25, the Securities and Exchange Commission (SEC) published an investor bulletin warning about the potential hazards of the new investment space. On the same day, it released an investigative report warning that “virtual” organizations’ offers and sales of digital assets may be subject to the requirements of the Securities Act of 1933 and the Securities Exchange Act of 1934.

On Nov. 1, the SEC issued a statement regarding celebrities’ “potentially unlawful promotion” of ICOs after stars including Paris Hilton, Floyd Mayweather and DJ Khaled publicly endorsed the investments.

The SEC warned that such celebrities “often do not have sufficient expertise to ensure that the investment is appropriate and in compliance with federal securities laws” and their endorsement could be considered illegal if compensation isn’t sufficiently disclosed.

An enforcement crackdown accompanied the increased scrutiny. On Sept. 29, the SEC took emergency enforcement action against Maksim Zaslavskiy, REcoinGroup Foundation LLC (REcoin) and DRC World Inc. (also known as Diamond Reserve Club) (Diamond), alleging they defrauded investors in a pair of ICOs, in violation of the anti-fraud and registration provisions of the federal securities laws.

Similarly, the SEC obtained an emergency asset freeze against an ICO fraud that raised up to $15 million from thousands of investors by falsely promising a thirteenfold profit in less than a month, and also prompted a California company to halt its ICO after raising registration concerns. In a December statement, SEC Chairman Jay Clayton noted the rapid rise of ICOs and explored questions regarding the legality and risks of the various products available.

Outside the U.S., China’s central bank instituted an immediate ban on ICO funding, which it said had “seriously disrupted the economic and financial order” in that country’s burgeoning financial market. The U.K.’s Financial Conduct Authority issued a stern warning to investors that they should avoid ICOs unless they are willing and able to lose their entire investment.

However, none of the regulatory pushback has slowed the rapid pace of ICO issuances, which looks primed to continue in 2018.

The second significant cryptocurrency development of 2017 was the launch of Bitcoin future trading on the Cboe Global Markets (Cboe) and CME Group (CME) exchanges, which the Commodity Futures Trading Commission (CFTC) approved Dec. 1. A potentially momentous development in the movement of digital currency into mainstream markets, the move should improve the access to and ease of Bitcoin trading for both Wall Street and individual investors.

While such futures were previously available on some unregulated overseas cryptocurrency exchanges, Bitcoin’s debut on established U.S. exchanges should enhance its legitimacy and attract a broader investor audience.

In addition, the exchanges could potentially bring a measure of stability to the relatively volatile cryptocurrency market by providing investors with an easy means to short the currency. Although concerns regarding volatility remain, cryptocurrency adopters see the move as part of a greater shift toward its legitimization, bringing improved liquidity and sophisticated trading options while reducing the risk of market manipulation.

The Rise of the ‘Hard Fork’

Finally, 2017 saw the launch of Bitcoin Cash, created by a so-called hard fork of Bitcoin’s blockchain. Rather than creating a brand-new cryptocurrency from scratch, this hard fork created a duplicate blockchain of Bitcoin that shares its transaction history, but with entirely independent future transactions and balances.

In general, an investor who owned Bitcoin at the time of the hard fork in August would have instantly owned an equal amount of Bitcoin Cash — prompting some observers to consider it “free money.” However, some providers indicated they would not distribute Bitcoin Cash, sparking a backlash among consumers demanding access to their forked coins.

From a taxation perspective, the Internal Revenue Service (IRS) issued guidance on the treatment of virtual currencies in 2014 but has since offered little insight into the matter. However, the IRS has typically considered traditional windfalls of “free money” to be taxable income, meaning investors could face tax liabilities as a result of the hard fork.

None of the three cryptocurrency developments discussed herein has fully run its course yet and we can expect further evolution on each in the year ahead as investors and regulators alike continue to chart a course through this rapidly evolving sector.