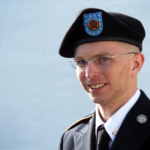 Bradley Manning has already created an uproar with his WikiLeaks case, but he may be headed for another legal showdown over his request to serve his time as a woman following hormone treatment.

Current Pentagon policy dictates that transgender soldiers are not allowed to serve, and Manning won’t be discharged until being released from prison and all appeals are exhausted. Furthermore, the military does not allow soldiers to undergo hormone treatments while in the all-male prison at Fort Leavenworth, Kan. — though this is the first time officials have heard of a request for such treatment, said Maria Tolleson, a spokeswoman with the Army Medical Command in Arlington, Va.
[wp_ad_camp_5]

“We’re just now dealing with the issue,” she said, adding it would be premature to say there has been any movement toward offering the care to all transgender inmates as a result of Manning’s case.

Manning also won’t be allowed to dress as a woman, as wigs and bras are not allowed. The soldier’s gender dysphoria — the sense of being a woman in a man’s body — coupled with the military convictions could leave Manning to face an isolated future, shunned by fellow inmates and transgender veterans on the outside who believe the leaks put Manning’s comrades in danger.

It is not known whether Manning could be transferred to a female prison, though defense attorney David Coombs has said that was not the motive behind the Army private’s statement Thursday asking to be referred to by feminine pronouns, signed “Chelsea E. Manning.”

On NBC’s “Today” show on Thursday, Coombs vowed to “do everything in my power to make sure that they are forced” to ensure Manning is provided with the hormone treatment, suggesting a lawsuit could be in the offing if the military doesn’t comply. The American Civil Liberties Union, the Human Rights Campaign, along with other advocates, also say Manning should get the treatment.
Coombs didn’t respond to telephone and email messages Friday from The Associated Press.

It’s not clear whether Manning directly requested the therapy, which typically involves high doses of estrogen to promote breast development and other female characteristics, at Fort Leavenworth after arriving Thursday.