The odor of rotten eggs resulted in calls to the Stafford Township Police Department in New Jersey.
According to Volunteer Fire Chief Jack Johnson residents of the area near the home reported a strong smell of natural gas. Johnson said firefighters, police and gas company workers went to area houses to evacuate residence of nearby homes.

Check out the Police Dashcam Video of the Burning Explosion

Johnson said he and workers looking for a suspected gas leak were about 50 feet from the home when a fireball burst into the sky, sending wood and insulation scattering for a great distance. Several people were hit by the debris and their eardrums were harmed from the blast. The event was captured on a police cruiser dashcam and Johnson said the force of the explosion knocked people off their feet.

Fifteen people were injured including six firefighters, two emergency medical service technicians that suffered concussion like injuries. Seven gas company workers were injured including two that are listed in critical condition with one requiring CPR at the scene.  The explosion occurred at approximately 10:32 and the cause is unknown. About 300 homes had electric and gas cut off in the area, New Jersey Natural Gas spokesman Michael Kinney said. 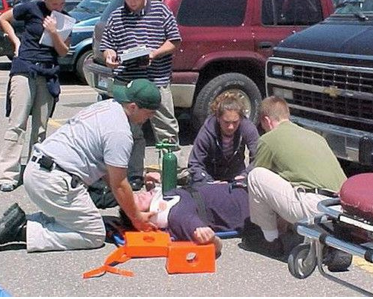