The Comcast takeover of Time Warner Cable might have fallen over, but it has heralded a major boost for Wall Street law giant Cleary Gottlieb, who have leapt to the top of the 2014 rankings for US deals.

Cleary Gottlieb have shunted Skadden Arps Slate Meagher & Flom, Time Warner lawyers for the independent directors and has been another triumph for Cleary Gottlieb following their deals for Family Dollar Stores, Biomet and Medtronics Inc.  With the failure of the Comcast, Time Warner deal, Clearly is one of the few law street firms in New York’s financial heart who have secured their top spot.

As the WSJ Law blog points out, the bragging rights are somewhat symbolic, and likely more so here since the reshuffling is retroactive. Still, league-table rankings are often used in marketing materials lawyers use to pitch their services.

Overall, the boom in M&A activity over the past 18 months has been good to law firms. While most don’t charge a straight cut of a transaction’s size, as bankers typically do (there is at least one notable exception) big, complicated public-company deals keep deal lawyers busy for months and can spawn work for tax, antitrust, financing and executive-compensation lawyers. 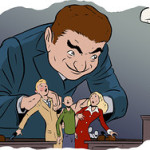