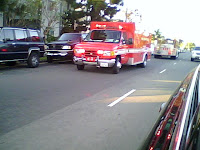 According to reports by Los Angeles School Bus injury lawyers, an accident involving an empty school bus and a compact vehicle ended in a fatality. The accident is under investigation and the school bus hit a tree after the impact with the vehicle.

A passenger in the vehicle who has not been identified with the exception of their age, the 24 year old was injured in the accident with multiple lacerations. The passenger was transported to the hospital, however their condition has not been released.

The driver of the bus was not injured and refused any medical treatment. The identity of the 30 year old driver has not been released pending notification of next of kin.