You are here: Home / Latest News / Female Law Firm, But Don’t Expect Any Less of This Firm 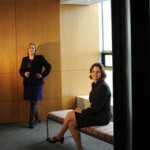 An all-female law firm wasn’t what Susan Brune and Hillary Richard had in mind when they started their own firm but now, a decade later, that is exactly what they have.

Thirteen of the 19 lawyers at the law firm Brune & Richard are women, six of them partners. But their femaleness is not something that is particularly distinctiveness, the principals told the New York Times.  Yet out of 220 of the biggest firms in the US, only 19 per cent of the partners are female according to the National Law Journal.

A top-flight New York litigation boutique, the firm handles corporate disputes for big clients like Prudential Insurance and Pacific Gas and Electric. On its white-collar defense docket, it represents finance executives ensnared in the rate-rigging investigation and the municipal bond kickback scandal.

“I have no choice but to practice law as a woman,” said Ms. Brune, 51, a white-collar defense lawyer and mother of three.

Ms. Richard, 53, a commercial litigator also with three children, put it more bluntly. “Clients don’t hire us because of our sex,” she said. “They hire us because we win.”

“Susan and Hillary were ‘leaning in’ long before Sheryl Sandberg raised these issues,” said Michele Hirshman, Ms. Brune’s supervisor at the United States attorney’s office, referring to the best-selling book by Ms. Sandberg, “Lean In,” which has stoked a national conversation about women in the workplace.

Ms. Hirshman, now a partner at Paul, Weiss, Rifkind, Wharton & Garrison, added: “At the time when other women might have leaned back and settled into more comfortable jobs, they did something different and bold.”

Ms. Brune and Ms. Richard cited “Lean In” when discussing their careers and noted that they had husbands who were their full partners in child-rearing and all other aspects of their domestic lives. (Ms. Brune’s husband, Carl H. Loewenson Jr., is a partner at Morrison Foerster; Ms. Richard’s, Peter McCabe, is the resident dramaturge at the Here arts center in SoHo.)

David B. Wilkins, director of the Program on the Legal Profession at Harvard Law School, said a firm like Brune & Richard, where so many women lawyers thrive, is an outlier. Since the mid 1980s, he said, women have composed roughly 40 percent of entering associates at large law firms, but their attrition rate far exceeds that of male lawyers.

“The problem is that the typical legal career is that it’s not just built for a man, it’s built for a man with a wife that doesn’t work,” said Professor Wilkins. “There’s a deepening crisis in the legal profession about the retention and promotion of women.”

Early on, Ms. Brune and Ms. Richard drummed up business through referrals from big firms and by forging relationships with in-house legal departments. A relationship with Bear Stearns led to the firm’s most prominent representation — its successful defense of Matthew M. Tannin, one of two former Bear Stearns executives acquitted in 2009 on charges they misled investors in their mortgage-backed securities hedge funds. The case was built on e-mails that prosecutors said proved Mr. Tannin and his partner, Ralph R. Cioffi, knew the funds were collapsing while they were reassuring clients of its soundness.

The monthlong jury trial was the first major prosecution of Wall Street executives stemming from the housing collapse. Some legal experts say they believe the loss made the Justice Department more circumspect about filing criminal cases against executives at the nation’s largest banks.