Fulbright New Zealand offers a range of exchange awards for New Zealanders and Americans to study, research, and then teach or present their work in each other’s country.

Chapman Tripp chief executive partner, Nick Wells, said the Fulbright awardees have been recognised for their dedication, leadership and willingness to contribute positively to Aotearoa in their respective fields.

Rachael, Ngāti Kahungunu/Ngāti Rakaipaaka, is in the firm’s litigation team and Māori legal team Te Waka Ture. She received a Fulbright Ngā Pae o te Māramatanga Graduate Award to attend Columbia University, New York. She will be studying towards an LLM in Constitutional and Indigenous Law.

“I’m looking forward to studying the cultural traditions and challenges of indigenous peoples internationally, and how I can apply this to iwi and clients in New Zealand,” said Jones.

Lizzie works in Chapman Tripp’s Finance team and technology and innovation team, Zeren. She received a Fulbright Science and Innovation Graduate Award to attend Cornell Tech, New York. She will be studying towards an LLM in Law, Technology and Entrepreneurship.

“I am passionate about the intersection between law, technology and social purpose and look forward to exploring how we can navigate the future of commerce and law in our changing and digitally disrupted world.”

Guy is in the corporate and commercial team at Chapman Tripp, with particular experie 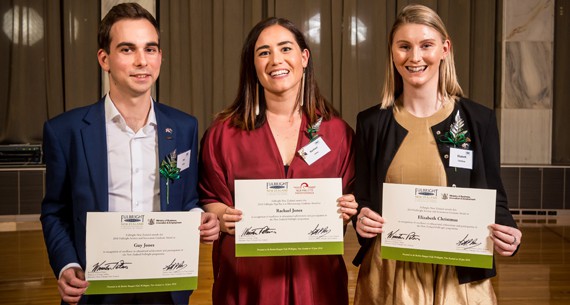 nce in the technology, media and telecommunications sectors. He received a Fulbright Science and Innovation Graduate Award to attend Columbia University, New York. He will be studying towards an LLM in law and technology, focusing on information privacy and data protection.

“My time at Chapman Tripp has enabled the development of my interest in the role of law in technological advancement. I’m excited about this opportunity to pursue further study in this area, at a time when issues in digital privacy, regulation of data analytics and artificial intelligence are of particular importance.”

The three Fulbright awardees will be leaving for the US later in 2018.