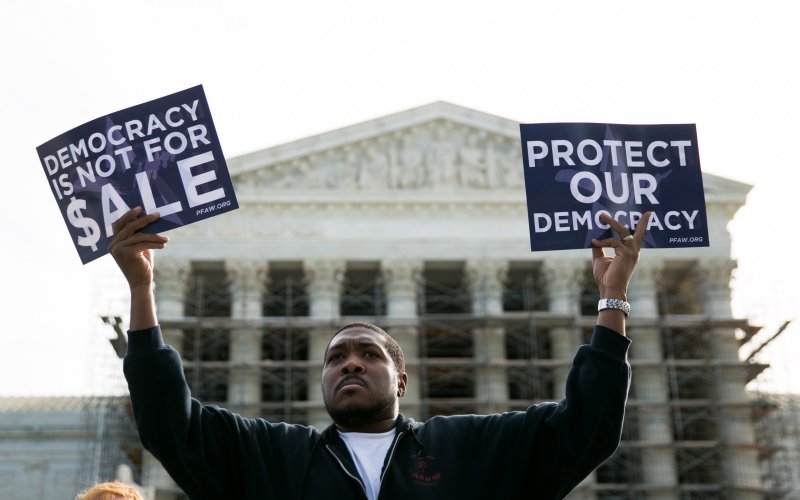 Mansur Gidfarwrites in the Huffington Post about the McCutcheon Supreme Court decision.  A former Upworthy deputy editor and contributor, he is the Communications Director of Represent.Us, a non-partisan national campaign to combat the undue influence of special interests in American government.

Now of course, there are rules. Federal law sets certain limits, so you can’t just go write a candidate a check for a million dollars and call it a day. That means you, dear hypothetical rich person, can’t give more than $2,600 to any one candidate per election. Even if you were to donate once in the primary election and again in the general, the absolute most you could give to an individual candidate’s campaign is $5,200.

Just giving that much would put you in a very exclusive club. In the last election cycle, a minuscule 0.08 percent of the population made more than $2,500 in political contributions. This isn’t terribly surprising once you consider that the absolute maximum donation of $5,200 per candidate per election cycle is more than the average American family makes in an entire month.

But if you’re part of that 0.08 percent of the population that has money to burn on political giving, why stop at one candidate? Why not dole out $5,000 bucks to a hundred different candidates just to be safe? That’s where McCutcheon v. FEC comes in.

Before the McCutcheon ruling, there was also an aggregate limit of $48,600 on contributions to candidates. That means that you’d be legally barred from donating 1,000 bucks each to 49 different candidates, because even though those $1,000 donations are below the individual candidate limit, that $49,000 in total contributions would put you over the aggregate cap.